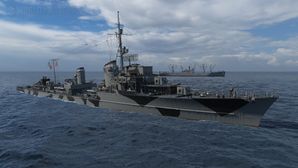 The lead ship in a series of Type 1936B destroyers, built during World War II under a project that was modified to incorporate the combat experience and operational capacity of ships from the preceding series. These ships carried a reinforced AA battery and 128 mm main guns.

Z-35 first was released for sale on 17 July 2020. It currently is available in the Premium shop.

Z-35 is a German Tier VIII Premium destroyer and the first German high tier premium destroyer to enter World of Warships. While being at the same tier as Z-23, Z-35 should best be compared to the predecessor: Leberecht Maass, as Z-23 features a main battery that bears few similarities to that of Z-35 while Leberecht Maass does.

In terms of armament Z-35 offers a surprisingly strong main battery. With a base reload of 3.4 seconds she matches the shell output of Z-46 but at a lower tier, with identical shells. This means that given the 1/4 pen on Z-35's HE shells Z-35 has no issues applying her HE dpm to cruisers and a lot of battleships, while her high AP dpm allows for her to deal large amounts of damage to broadside cruisers or battleships at closer range. Her main battery range is also at a comfortable 12.1km, however the distribution of the main battery as well as the gun handling is less favorable. With five guns along the centerline, Z-35 has unfavorable firing angles in particular to the rear of the ship. The traverse speed, while not overly bad, still leaves a lot to be desired.

The torpedo armament in exchange is underwhelming when compared to her colleagues. While boasting the same fast reload speed as all the other German destroyers at Tier VII and upwards, her torpedoes come with a very short range of 6km. This makes them difficult to use tools that can only be relied upon when at closer range, though given their low Alpha damage they can also disappoint when used against larger opponents.

Compared to her peers Z-35 comes with a healthy hitpool, which when combined with Survivability Expert leaves Z-35 just short of 22,000 hitpoints. This allows Z-35 to take a few hits while not feeling too uncomfortable, although the lack of a Repair Party

should discourage Z-35 from taking too much damage. If the situation gets too heated, Z-35 comes with a special Smoke Generator

consumable that shares similarities with those found on British destroyers. A quick reload allows Z-35 to always have a smoke screen at hand to either disengage from opponents, hide herself from aircraft or to gain a very short window of opportunity to fire at a preferably low health target from smoke. The short duration of 40s should always be kept in mind however.

As with her colleagues, Z-35 has access to the Hydroacoustic Search

consumable that allows her to spot torpedoes for her team or push ships out of their smoke screen.

In terms of playstyle Z-35 should try to work with other destroyers around the cap zones. Her ability to apply direct damage against cruisers and her Hydroacoustic Search can help the team gain control over the vital areas and contribute to victory. Her worst enemy are enemy aircraft, as Z-35 lacks the means to defend herself against them and her best option is to utilize her rapid recharging smoke to make herself an unappealing target.

As a premium ship, Z-35 doesn't have any upgrades to research.

The recommended upgrades for Z-35 are as follows:

As a premium ship, Z-35 comes included with Type 10 camouflage that lowers her detection radius, reduces the accuracy of incoming shells, reduces her repair costs, and increases the amount of experience she earns.

With the 1936A type destroyers being unpopular with the crews, the German Naval command decided to finish several of the 1936A (Mob.) destroyers with a lighter main armament, the same one as found on destroyers of the 1936 type. Five open single mounts, a superfiring pair fore and aft as well as a gun in front of the rear superstructure facing forward, gave them the same firepower as older German destroyers while not hindering the gunnery crews in their operations.

A further addition was a strengthening of the AA armament. Bridge wings were added for two 20mm quadruple mounts. Plans like for all other German destroyers were drafted to strengthen their AA armament further in late 1944, however their premature loss prevented those plans to be realized. The intended AA armament would have consisted of seven 37mm M42 twins as well as two single mounted 37mm autocannons, one 20mm quadruple on the rear superstructure and four 86mm AA rocket launchers while the main armament would have been reduced by one gun.

In all the other regards these ships were highly similar if not identical to the preceeding 1936A (Mob.) type (see Z-39 for reference).

Achieving full combat readiness only in February 1944, Z-35 was deployed in the Baltic Seas often alongside her sistership Z-36. There she performed minor tasks such as escorting cruisers like Prinz Eugen and Lützow or providing coastal bombardments . On October 16th 1944 she guarded the two cruisers Prinz Eugen and Leipzig, which collided in the fog and were stuck. On December 9th Z-35 alongside Z-36, Z-43 and the torpedoboats T-23 and T-28 prepared a mine operation. On December 12th during said operation Z-35 accidently entered a minefield on her own, was struck and sank with all hands. Her sistership Z-36 would share the same fate on the same day.

Ships of Germany
Destroyers
Retrieved from "http://wiki.wargaming.net/en/index.php?title=Ship:Z-35&oldid=317594"
Categories:
Your location:
To log in, select the region where your account is registered
CIS Europe North America Asia
Or use Microsoft Login to enter WoT XBOX ecosystem
Log in