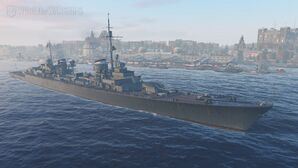 A project for a so-called "reconnaissance cruiser", and the culmination of efforts to create a destroyer that would be capable of operating on the high seas. She was a large destroyer with 150 mm main guns placed in twin turrets, and carried powerful torpedo armament.

Elbing is a Tier X German destroyer that tends to share more in common with cruisers than other destroyers at her tier. Her 150 mm armor-piercing (AP) shells pack a punch, capable of penetrating to the citadel of many cruisers who show their broadside. She is also armed with torpedoes and has access to the Defensive AA Fire

Beginning with her strong traits, Elbing has good guns sporting decent ballistic properties. For a destroyer, her main battery has an exceptional firing range with a very good accuracy, meaning that players can choose to engage at longer ranges to harass enemy capital ships. Combine that with her improved pen angles and excellent pen (Comparable to the AP pen of Hindenburg), she is a serious threat to cruisers. Her torpedoes hit hard and reload quickly, despite their slow speed in the water. Her two rear-facing gun mounts enable Elbing to defend herself well when retreating. Despite these traits, players may find that Elbing poses some difficulties while serving in a traditional destroyer role. With a modest detectability range, she will likely be spotted first in an engagement. Once detected, Elbing is a large target due to her size and height out of the water. Players will quickly discover that Elbing has a very poor turning radius and a sluggish rudder that makes conducting emergency maneuvers to dodge incoming ordinance difficult. Unlike Z-52, Elbing does not have access to the Hydroacoustic Search

consumables, making it difficult to engage in a playstyle where countering enemy destroyers is a priority. For these reasons, Elbing excels at medium to long-range harassment of enemy ships, along with scouting roles.

Elbing is best utilized as a scout ship to harass enemy ships and engage in target spotting to assist teammates. Her large pool of hit-points, access to the Defensive AA Fire

consumable, long-range guns with good ballistics, and torpedo armament make her a formidable threat to any ship she faces. She is relatively self-sufficient, but players should try to avoid close-quarters engagements with other destroyers to minimize the difficulties presented by her large profile and poor turning capabilities.

As a Tier X ship, Elbing has no upgrades to research.

While the range of Elbing's torpedoes is long enough that they can be considered an offensive weapon, they are not the ship's primary strength. Skill points are better invested elsewhere.

4 boilers, 2 turbines for the outer shafts
4 diesel motors for the inner shaft

The lack of oceangoing destroyers forced the Kriegsmarine to design a class of ships capable of Atlantic operations with a cruising range suited for that task. Their intended field of operations would be to act as merchant raider and escorts in the Atlantic, to be suited for tropical conditions as well as counter the French destroyer leaders.

The first stage of this thinking was the 1936A type, however experience with those ships showed an insufficient cruising range, preventing any sort of Atlantic operation. Furthermore, the sea keeping of those destroyers left much to be desired and so a new set of designs was drafted, the 1937 type destroyers. These were much enlarged designs with better sea keeping, but would still not have the cruising range desired for open ocean operations. As they were almost the size of light cruisers at that point while not matching either the protection of a cruiser or the speed of a destroyer, they were discontinued. Instead the 1938 type destroyers were drafted, with 1938A being the ocean going destroyer while 1938B would be a smaller design for service in Northern and Baltic waters. What set the 1938A apart from preceding designs was the usage of a third shaft with Diesel propulsion for increased range. This design would eventually evolve into the Spähkreuzer 1938 design, on which Elbing is based.

The Spähkreuzer 1938 design called for a 152.2m long and 14.6m wide hull to provide the necessary sea keeping. The empty ship alone would displace 4,589 tons, growing to 5,037 and 5,900 tons standard and fully loaded respectively. 520 enlisted men and 18 officers would crew the ship.

In terms of protection the Spähkreuzer 1938 design only accounted for splinter damage. 15mm Ww plates acting as longitudinal bulkheads would provide some protection to vital areas, with a 10mm Wh deck connecting to the upper edge of the bulkhead. The bridge area received a similarly thin protection with only 10-15mm strong Wh plates. The strongest protection would be on the turrets, with 30mm Wh faceplates. A double bottom providing some anti-mine protection covered 81% of the ship's length.

The main armament was designed with six 150mm L/48 C/36 cannons, mounted in three twin turrets on the centerline with one turret fore and a superfiring pair aft. These guns would fire a 45kg heavy projectile at ranges up to 23.5km, reloading within at best 7.5 seconds. The auxiliary armament was initially planned to consist of five 37mm L/83 C/30 twin mounts and three 20mm Flakvierling 38 mounts, arranged around the superstructure. Unlike most German destroyers the torpedo armament grew to ten tubes, mounted in two quintuple torpedo launchers.

For machinery the Spähkreuzer 1938 design carried two independent steam turbine sets and one set of four diesel motors geared down via a gearbox to drive the shaft. The turbines, manufactured by Wagner, were supplied with 450°C hot steam at 70atü pressure steam by two Wagner-boilers. The Diesel motors were to be built by MAN and provide roughly 3,650hp each, which after the gearbox would result in 14,500shp on the central shaft. Each wingshaft would be driven by 38,750shp, for a total of 92,000shp to permit the 35.5kn max speed. With a fuel capacity of 820 tons the cruising range was calculated to be 8,000nm at a speed of 17kn.

Ships of Germany
Destroyers
Retrieved from "http://wiki.wargaming.net/en/index.php?title=Ship:Elbing&oldid=322557"
Categories:
Your location:
To log in, select the region where your account is registered
CIS Europe North America Asia
Or use Microsoft Login to enter WoT XBOX ecosystem
Log in