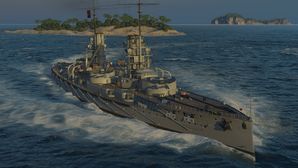 König Albert is very similar to her Tier IV sister Kaiser in that she has strong armor and strong guns. However, her guns reload slower and she has shorter range; being a tier lower, though, her guns are more than adequate. She has extremely tough armor and can take a beating from anything at her tier and even a tier above. Her armor can reliably bounce 12-inch shells when angled and with over 40,000 hit points, she has a large advantage over her Tier III peers. Her secondary armament is quite strong, and can be buffed — via commander skills and upgrades — to a level that it is a serious deterrent to enemy destroyers trying to close in.

It's good that her secondaries will discourage enemy destroyers, for like most low tier battleships König Albert is glacially slow and is not quick to respond to her rudder. This makes her particularly vulnerable to destroyers; especially to unexpected torpedoes fired from stealth. Combined with her slow turret traverse, she is not good at flexing around the map, making planning ahead important, else captains can easily wind up well out of an engagement and unable to affect the outcome of a battle.

As a premium ship, König Albert doesn't have any upgrades to research.

The recommended upgrades for König Albert are as follows:

As a premium ship, König Albert comes with Default permanent camouflage and a set of permanent combat bonuses.

The most imperative flags that are recommended to mount on König Albert are: India Delta ( 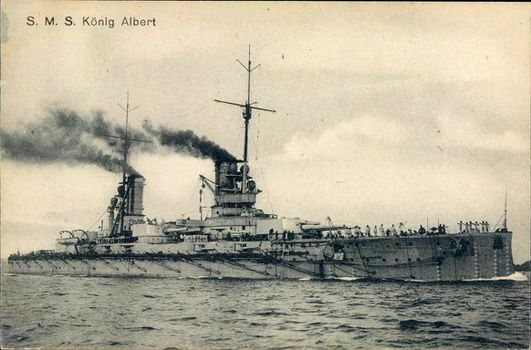 In order to keep their fleet modern and capable of confronting the other naval powers of the world, Germany enacted the Second Naval Law which instituted that all capital ships had a life expectancy of twenty years. In accordance with this new law, the Kaiser-class battleships were ordered to replace the aging Siegfried and Odin class coastal ships. Drawing from the strengths of the preceding Nassau and Helgoland class battleships, German engineers had hoped to design a vessel capable of competing with the leading designs from the Royal Navy.

Like the Helgoland class battleships, the Kaisers carried 305mm rifles, but abandoned the unsuccessful hexagonal turret layout in favor of having three turrets mounted on the centerline and two offset turrets amidship. This design is a compromise between superfiring turrets requested by Großadmiral Tirpitz, and the more traditional wing turret design. The en-echelon arrangement allows all gun to be brought to broadside, while not requiring the longer, heavier and more expensive all-centerline superfiring turrets arrangement. Though the caliber of the rifles were smaller than those on British dreadnoughts, the German guns had a higher fire rate which was considered optimal in the expected close quarters engagements in the North Atlantic. In addition to a powerful main battery, the Kaiser class boasted a very potent secondary armament. These warships were also well protected with Krupp cemented steel plating, commonplace among contemporary German warships. The Kaiser class battleships were also among the first German capital ships to be powered by turbines rather than reciprocating steam engine. This granted the battleships a much longer range and higher cruising speed over preceding classes. Despite the vessels’ excellent seagoing abilities, they had a tendency to list heavily and drastically lose speed when conducting a heavy turn.

König Albert was the fourth of five ships in her class. She was identical to her sister ships in terms of armor and armament, but was fitted with Schichau turbines instead of the more powerful Parsons turbines installed on her sisters. These new turbines were not installed for better performance capabilities, but instead as an alternative to the Parsons monopoly.

König Albert was officially commissioned on 31 July 1913. Although laid down before Prinzregent Luitpold, König Albert was the last of the Kaiser-class battleships to be launched. She spent the majority of the following months in sea trials, testing, and fleet maneuvers. In December 1913, König Albert, Kaiser, and the scout cruiser Straßburg were assigned the mission of port calls in South America as a means of demonstrating German naval power while also testing endurance, seaworthiness, and the propulsion system with which she had been built. Departing Wilhelmshaven on 9 December 1913, these ships spent several months touring ports of call in German West and South Africa, finally arriving in Argentina by February 1914. Making their way south, they rounded Cape Horn and finally arrived in Chile before retracing much of the previous route on the way back to Germany, with Kiel as the final destination, where they arrived in June. Having completed her detached service, König Albert was reassigned to the newly formed III Battle Squadron of Hochseeflotte (High Seas Fleet).

The III Battle Squadron led the German battle line during all of the major operations during World War I. During the first year of World War I, König Albert, as part of the Hochseeflotte, took part in the fleet advances on 2–4 November 1914 and 15–16 December 1914 to bombard the English coast in attempts to bait the British Grand Fleet into battle. While these repeated intercept sorties were unsuccessful, she also participated in covering operations intended to screen attempts to reinforce minefields in the Helgoland Bight which were vital to the security of the fleet.

On 15 May 1915, König Albert had to uncouple her starboard turbine because of a malfunction, limiting her speed to 18 knots. König Albert was placed in Wilhelmshaven Imperial Drydock from 29 May to 15 June 1916 and consequently was not in the battle line during the Battle of Jutland. She was part of the support group for rescuing U-20 and U-30 on 4 November 1916 which had become stranded on the Danish coast. König Albert transferred to the newly formed IV Battle Squadron on 1 December 1916.

It was not until October 1917 that she saw her first major engagement, when König Albert was attached to the naval force tasked to the capture of the Russian port of Riga and the reduction of its defenses. Assigned to the bombardment of the shore batteries defending the harbor, König Albert supported the army offensive against the port for four days. Her mission having been considered complete on 19 October 1917, she returned to Wilhelmshaven. On 2-3 November 1917, König Albert served as a flagship for a force covering minesweeper operation in the German Bight. The remainder of König Albert’s war service would prove uneventful as she relegated to picket duties.

The signing of the armistice which would end the war saw — as one of the conditions — the internment of the German fleet at Scapa Flow. Just over two weeks after the armistice was signed on 11 November 1918, the ships of the German fleet, including König Albert, set sail for Scapa Flow under close escort. There they remained for six months until the disposition of the ships was determined by the Treaty of Versailles. In order to prevent the possibility of the Hochseeflotte being seized and divided up amongst the victorious nations, the admiral in command, Ludwig von Reuter, had ordered his ships to secretly prepare to scuttle on short notice should said nations attempt to seize the ships without German consent by treaty. On 21 June 1919, having received no notification as to the disposition of the fleet, believing the treaty to have been signed that day, and convinced the fleet was to be divided amongst the nations of the Entente, von Reuter ordered his ships to scuttle. Of the German battleships and battlecruisers interned at Scapa Flow, none save Baden survived, and König Albert sank at roughly 1:00 PM local time, 21 June 1919.

Ships of Germany
Battleships
Retrieved from "http://wiki.wargaming.net/en/index.php?title=Ship:König_Albert&oldid=319656"
Categories:
Your location:
To log in, select the region where your account is registered
CIS Europe North America Asia
Or use Microsoft Login to enter WoT XBOX ecosystem
Log in