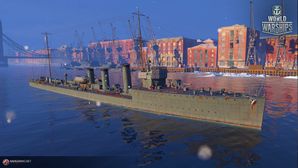 Initially intended for the Greek Navy, but with the outbreak of World War I, she was assigned to the Royal Navy. Medea's main advantage over her same-type foreign contemporaries was her large-caliber—533 mm—torpedoes.

HMS Medea introduces players to the British Destroyer tech tree. As such, Medea will be most effectively played as a defensive destroyer.

Medea will be most comfortably played as a destroyer that is supporting an allied screen of destroyers or cruisers, or within contention of a cap circle. While she does not have the gun angles to pursue foes, she can keep all her guns pointed forward, which allows quick response to oncoming threats, as well as allowing her to maneuver whilst keeping pressure on the enemy. Given her good health pool, she has the stamina to survive drawn out gunfights given proper situational awareness and decision-making.

Furthermore, single-fire torpedoes provide Medea captains a degree of flexibility not seen in the tier. In a defensive situation, captains can manually decrease the spread between torpedoes to ensure a heavy punch into a vulnerable broadside of an unaware foe, or can use individual torpedoes to misdirect an enemy into a heavier spread of incoming fish; catching them off-guard. Once Medea closes the distance, she is a difficult adversary to shake off.

A special note on the Short-Burst Smoke Generator

given to royal navy destroyers; due to their short duration, it encourages captains to continue to reposition their vessel in order to keep pace with the flow of battle. As a destroyer, Medea is most effective supporting an assault or ambush, ergo the smoke provides an ability to set up a temporary cover from enemies. An individual charge seems like less of a waste if used incorrectly and a following charge should be available soon.

Availability of researchable upgrades for Medea is as follows:

It is recommended to solely focus on Hull upgrades for captains who wish to progress further up the tech tree. Furthermore, the B Hull configuration installs new artillery, which is more competitive in-tier. For captains who wish to continue playing Medea, Mk II mod. 2 is an inexpensive upgrade to research and mount.

The recommended upgrades for Medea are as follows:

in order to mitigate the chance of magazine detonation during combat.

Recommended skills for Medea commanders should be focused on enhancing her ability to engage other destroyers in artillery duels. This equates to a preference for skills focused on survivability and gun performance. A full breakdown of recommended skills are shown below:

: Royal Navy destroyers come equipped with a unique smoke screen generator. Once activated, they will only dispense for a maximum of 40 seconds, but in turn the consumable will recharge in 80 seconds.

Combat signal flags will be the ones most frequently mounted; it is recommended to focus on buffing her speed and main battery. Full list of appropriate signals for Medea is shown below:

The Medea-class destroyers were a product of the waning contention between Greece and the Ottoman Empire in the early 20th century. Especially after the First Balkan War, the Greek Navy placed an order for new warships from France and Britain. Specifically, they ordered a near identical version of the British M-class destroyers coming into service at the time.

The British Board of Admiralty conceived the M-class destroyers in 1913. They were based off the preceding Laforey-class destroyers, but with alterations made to the dimensions, and machinery.

The biggest change was the incorporation of the newer boilers designed by Yarrow & Company. Furthermore, some of the M-class destroyers added one more turbine than their predecessors, to three total. All of this meant that during speed trials, the class of destroyers added more than 6 knots to their total speed.

The armament was identical to the ones pioneered on the Laforey-class. Main armament consisted of three of the newer 4-inch/45 QF Mk VII guns, with two dual 533mm torpedo tube launchers; which was a quite heavy barrage for its time. The anti-aircraft suite was improved from 37mm guns to 40mm guns.

There were some differences to the Greek destroyers, compared to their British counterparts. The Greek ships had a taller fore funnel where as the British equivalents had equal-sized funnels. The mainmast was taller than the foremast; a practice not common till later in the century. The main guns were placed uniquely on the Medea-class; one on the forecastle, one abaft the fore funnel, and one of the quarterdecks. Both ships had the three boilers organized between two rooms; a large room housing two, and a smaller room housing one. The Greek ships had the large boiler room beside the single engine room, with the smaller boiler room front, whereas the British ships had the smaller room beside the engine room with the larger room front.

Two separate firms – John Brown & Company, and Fairfield Shipbuilding – built all four ships. All were ordered on April 1914, but with the First World War commencing just two months after, the Royal Navy purchased the entire class from the Greek Navy by August 1914.

All four ships were commissioned as part of the well-known Harwich Force. At the beginning of the War, the Admiralty was keenly aware of the threat posed by any German raids entering the Channel form either end with the goal of harassing civilian and merchant traffic. The Harwich Striking Force was a collection of cruisers and destroyers stationed from the eponymous town in order to guard the southern entrance to the Channel from enemy raiders and to provide escort for maritime trade approaching and departing the Thames.

HMS Medea
She was completed on June 1915 and was part of the 10th Destroyer Flotilla, as part of the Harwich Force. She survived the war and was scrapped in 1921.

HMS Medusa
She was completed in July 1915 and was part of the Harwich Force. She was tragically lost in 1916 when destroyer HMS Laverock rammed her during a counter-raid against a German airship.

HMS Melampus
She was completed in June of 1915 and joined the Harwich Force as a tender for the 8th Submarine Flotilla. In April 1917 she accidentally rammed the C-class submarine C-16, which was lost with all hands on board. She survived the war and was scrapped in 1921.

HMS Melpomene
She was completed in August of 1915 was part of the Harwich Force as a destroyer commissioned into the 10th Destroyer Flotilla. She survived the war and was scrapped in 1921.

Ships of U.K.
Destroyers
Retrieved from "http://wiki.wargaming.net/en/index.php?title=Ship:Medea&oldid=322011"
Categories:
Your location:
To log in, select the region where your account is registered
CIS Europe North America Asia
Or use Microsoft Login to enter WoT XBOX ecosystem
Log in