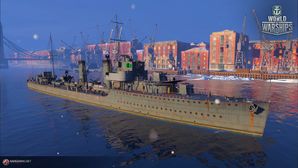 A representative of the first series (A-class) of the so-called "standard" destroyers of the British Navy that had very similar characteristics and arrangement. She was bigger in size and had quadruple torpedo tubes in comparison with the ships of the previous classes.

As a destroyer with the same acceleration that is a highlight of the Royal Navy cruisers, a smoke generator that lasts far shorter than the German destroyers’, and decent concealment, this ship can be considered, by far, one of the weakest destroyers for its tier. However, her ability to single-fire her torpedoes is not to be trifled with.

consumable in exchange for super acceleration. This makes it much easier to quickly react to and evade slow incoming torpedoes that have been detected at proximity detection distance. However, this is only possible if the ship is already in forward motion or stationary, as the acceleration from reversing to forwards is, much like the cruisers of the same nation, painfully slow. Another attribute which Acasta also lacks is a buffer range for using torpedoes; that is, her maximum possible concealment is the same as her torpedo effective range (6.0km). Players will have to utilize the enemy ships' path and forward momentum to stay hidden while launching their torpedoes undetected. And the power of Acasta’s ability to single-fire torpedoes thus comes into play; any enemy ship heading straight in a line can and will be struck by the salvo of all eight of her torpedoes, which generally results in a devastating strike.

While Acasta at a first glance seems as one of the weakest destroyers of tier V, her acceleration, concealment, and ability to single-fire torpedoes are her other strengths that players can utilize, although it is difficult to do so. She requires a different mindset and approach to use effectively. And above all else, players should avoid Podvoisky as much as possible, as Podvoisky can be considered her worst enemy due to the speed difference.

Availability of researchable upgrades for Acasta is as follows:

The recommended upgrades for Acasta are as follows: 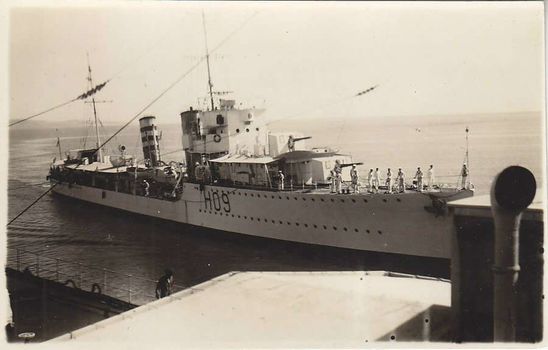 HMS Acasta, the third ship to bear that name, launched in 1929, was an A-class destroyer built for the Royal Navy. She served in the Second World War and was sunk on 8 June 1940 in action against the German warships Scharnhorst and Gneisenau, while escorting the aircraft carrier Glorious. Glorious and her other escort — Ardent — were also sunk.
Acasta proved to be a tough opponent for the larger German ships, laying smoke to hide Glorious and making repeated torpedo and gun attacks. She scored several gun hits and one torpedo hit on Scharnhorst, causing moderate damage to the much larger German vessel. Acasta was finally sunk after roughly two hours of fighting; the battle flag of the Gneisenau was lowered to half-mast and her crew brought to attention to honor the brave fight of Acasta and her crew. The damage to the German vessels inflicted by Ardent and Acasta caused them to retire to Trondheim, allowing the safe passage of convoys carrying Allied troops from Norway.


Although many of her crew survived to abandon the ship, communication errors meant the British were initially unaware of the sinking. In the end, there was only a single survivor from Acasta; estimates place the number of sailors from Ardent, Acasta and Glorious lost to exposure (rather than direct enemy action) at up to 800. The single survivor from Acasta, Ldg. Seaman Cyril Carter, was rescued by the Norwegian steam merchant Borgund which also saved 38 men from one of Glorious' lifeboats. All 39 men saved by Borgund were set ashore at Tórshavn in the Faroe Islands on 14 June.

Ships of U.K.
Destroyers
Retrieved from "http://wiki.wargaming.net/en/index.php?title=Ship:Acasta&oldid=319150"
Categories:
Your location:
To log in, select the region where your account is registered
CIS Europe North America Asia
Or use Microsoft Login to enter WoT XBOX ecosystem
Log in