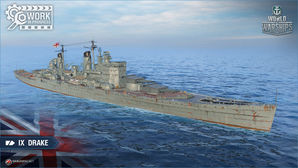 The project of a warship designed in the late 1930s which was to be able to effectively counter the latest German heavy cruisers. Superiority in firepower was achieved through the use of 234 mm main guns.

Drake is the Tier IX British heavy cruiser for the Tech Tree, being the link between the Tier VIII Albemarle and the end of the line, TX Goliath.

Over her predecessor Drake offers an improved main battery, with an increase in caliber and hitting power while at the same time trading reload speed. With 18.5s stock reload time, Drake is on par with the same tier super cruiser Kronshtadt in terms of loading speed. However, while the fire rate may seem like a burden, the shells themselves are among the best at the tier. High Alpha damage and high fire chance on her HE shells, coupled with improved penetration capabilities that let her penetrate up to 58mm of armor, give Drake a nasty tooth that no other surface ship type wants to be hit with. Furthermore, her AP penetration is among the highest of tech tree cruisers at that tier, making those shells a valid choice against any target at a lot of ranges, should they choose to show Drake their side.

With an improved repair ability and not taking over the odd citadel shape of her predecessor, Drake can withstand incoming AP shells better than Albemarle. However, this requires her to be at an angle when being shot at by battleship caliber guns.It should be noted that despite the more advantageous shape, the citadel still raises well above the waterline while extending over a significant length of the ship, so showing broadside can turn into an instant trip back to port.

With Drake's excellent concealment figures and her impressive healing skills, Drake should be played in the open water, keeping an eye on her surroundings to not receive flanking shots while mercilessly wittling down opponents with her hard hitting shells. If there is the need to, the player can disengage quickly to regenerate hit points and relocate. Aircraft carriers, while loosing parts of their strike wave in the process, can and will pose a threat to Drake. Investing into AA skills can mitigate this, but that will cost points that could be invested elsewhere. Priority targets should always be destroyers, as the hard hitting HE shells will cause tremendous damage to both their hit points and their modules.

Availability of researchable upgrades for Drake is as follows:

The priority of research should depend on the Modules equipped. If the player has decided to equip Gun Fire Control System Modification 2

The recommended upgrades for Drake are as follows:

Alternatively, Slot 6 can be filled with Main Battery Modification 3

, if a player wishes to improve Drake's slow reload. However, this will leave her rather short ranged.

Drake can equip the following consumables:

Players who wish to spend doubloons can equip Drake with Type 19 camouflage that lowers her detection radius, reduces the accuracy of incoming shells, reduces her repair costs, and increases the amount of experience she earns.

Ships of U.K.
Cruisers
Retrieved from "http://wiki.wargaming.net/en/index.php?title=Ship:Drake&oldid=317518"
Categories:
Your location:
To log in, select the region where your account is registered
CIS Europe North America Asia
Or use Microsoft Login to enter WoT XBOX ecosystem
Log in