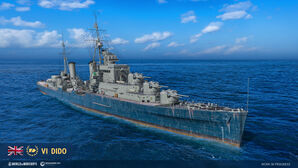 A relatively small cruiser designed to provide AA cover for squadrons and interact with destroyers. One of the first ships to carry dual-purpose guns as their main battery.

Dido was first available during the Gibraltar Pillars event during Update 0.11.1. on 16th Feb 2022.

As a premium ship, Dido has no module upgrades to research.

As a premium ship, Dido comes with Default permanent camouflage and a set of permanent combat bonuses.

Ships of U.K.
Cruisers
Retrieved from "http://wiki.wargaming.net/en/index.php?title=Ship:Dido&oldid=323724"
Categories:
Your location:
To log in, select the region where your account is registered
CIS Europe North America Asia
Or use Microsoft Login to enter WoT XBOX ecosystem
Log in