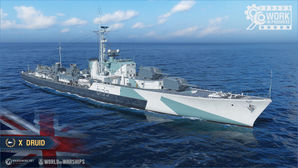 Fully specialized for concealment, Druid has a somewhat high detectability range, meaning that Druid will often be spotted first in an engagement. Players must account for enemy destroyers with lower detectability ranges that will expose them in a flanking maneuver. In an engagement, Druid excels at punishing enemy destroyers foolish enough to show their broadside. Armed only with armor-piercing (AP) shells, Druid may have trouble penetrating the armored hulls of angled ships. In a scenario where a ship is running from an engagement or turning, players should aim for the superstructure to increase the likelihood of an effective penetrating hit. If players find themselves in a predicament, Druid is armed with a long-lasting Short-Range Hydro-Acoustic Search

consumable as well as a Short-Burst Smoke Generator

. Although a bit limited in their function, they may be just enough to help the player avoid torpedoes or break line of sight with an enemy to return to concealment or briefly engage from the smokescreen. Perhaps the most useful consumable is her Repair Party

. Druid is equipped with a decent repair party that can help her recover hit points after taking damage in a fight, increasing her usefulness and longevity in gameplay. Both of her gun mounts are located in a forward-facing configuration, leaving her stern unprotected when running or facing away from enemy ships.

Due to her high detectability range and lack of torpedoes, players must plan their attacks and take special note of where enemy destroyers were last spotted to avoid being detected unexpectedly. Druid excels at hunting and gunfighting other destroyers but she will likely be spotted first. She is fully capable of harassing and dealing decent damage to larger ships. To increase the likelihood of a successful engagement, players must account for an exit strategy to disengage from the fight while also utilizing consumables to maximize the ship's effectiveness in combat.

The optimal configuration appears below in the recommended upgrades list. This build balances gunfighting with concealment, providing players with the opportunity to return to concealment more easily. For skilled players intending to fully utilize Druid as a gunboat, engaging other ships at long range, they may opt to install Steering Gears Modification 2

should be installed in Slot 3 and Auxiliary Armaments Modification 1

gives players the opportunity to break line of sight with the enemy and return to concealment in the smokescreen, as long as no enemy ship has used Surveillance Radar

within its respective range of Druid. The smoke generator on Druid provides a small smokescreen that lasts less than a minute. The reload time is quick, allowing for smokescreens to be produced in rapid succession with a short period of time where Druid is exposed. This consumable is particularly effective when playing aggressively, as it may be deployed when Druid ventures too close to enemies, or in a situation where she is being targeted by multiple ships. The very limited range of her Short-Range Hydro-Acoustic Search

means that it will mostly be effective for spotting torpedoes while in smoke.

As a premium ship, Druid comes with Default permanent camouflage and a set of permanent combat bonuses.

Ships of U.K.
Destroyers
Retrieved from "http://wiki.wargaming.net/en/index.php?title=Ship:Druid&oldid=321560"
Categories:
Your location:
To log in, select the region where your account is registered
CIS Europe North America Asia
Or use Microsoft Login to enter WoT XBOX ecosystem
Log in