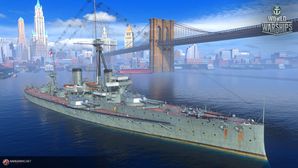 This ship began a new era in the naval history. It was the first battleship in the world whose main battery consisted only of large-caliber guns as well as the first ship of this type having a turbine-driven propulsion. She significantly surpassed her predecessors in size, speed, and armament in particular.

Dreadnought is one of the more famous warships present in World of Warships, and she has the heavy burden of expectations that accompany any famous vessel for her to live up to.

Dreadnought is the second Tier III premium battleship, alongside the German battleship, König Albert. Like many of her peers at this tier, she possesses five twin-gun turrets, two of which exist as wing turrets, with one on either side of her hull. Like many of her counterparts, she has no super-firing front guns, so captains are forced to sail nearly full-broadside to get the maximum number of guns on target. Luckily, Dreadnought has a sturdy armor scheme that allows her to soak up a fair amount of damage.

In comparison to her tech-tree counterpart, Bellerophon, Dreadnought has less hit points, absolutely no anti-aircraft firepower, and is slightly slower. In exchange, Dreadnought is a bit more maneuverable in terms of rudder shift and turning circle, as well as having better concealment.

Like all low-tier battleships, captains of Dreadnought will be hard pressed to get any reasonable performance out of her guns at range, and should prioritize reaching close-range engagements. Her good maneuverability will serve her well in brawls, and make dodging enemy torpedoes easy.

As a premium ship, Dreadnought doesn't have any upgrades to research.

The recommended upgrades for Dreadnought are as follows:

Dreadnought can equip the following consumables:

As a premium ship, Dreadnought comes with Default permanent camouflage and a set of permanent combat bonuses.

HMS Dreadnought was a Battleship laid down by the Royal Navy in 1905, which set a new world-wide standard for Battleships as well as coining the today well-known term "Dreadnought". The principle of modern Naval Combat was realized by introducing a unified caliber for the main battery, a high speed of 21kn and an armor protection sufficient for its time, while at the same time not displacing more weight than what was necessary.

Being completed within 14 months, she also demonstrated that the ship-building capabilities of the United Kingdom was not to be underestimated.

While never being part of a Naval Battle, HMS Dreasdnought did distinguish herself by being the only Battleship in history to sink a submarine. In 1915 she rammed the German UBoat U-25, which as a consequence sank. Following WW1 HMS Dreadnought was sold for scrap in 1920.

Ships of U.K.
Battleships
Retrieved from "http://wiki.wargaming.net/en/index.php?title=Ship:Dreadnought&oldid=324577"
Categories:
Your location:
To log in, select the region where your account is registered
CIS Europe North America Asia
Or use Microsoft Login to enter WoT XBOX ecosystem
Log in