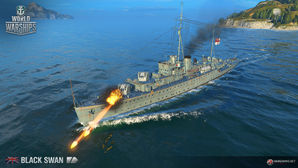 The Black Swan-class sloops — the most numerous ships of this type in the Royal Navy during World War II — were intended for escorting and guarding convoys. They had a rather moderate speed, but outgunned their foreign counterparts in terms of firepower and rate of fire.

Like all Tier I ships, Black Swan has no researchable upgrades.

The recommended upgrade for Black Swan is:

As a Tier I ship, she has access only to the Damage Control Party 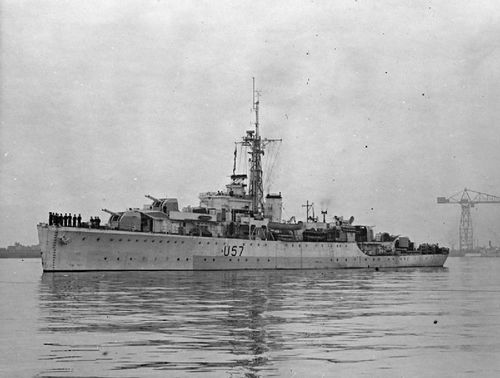 HMS Black Swan was laid down by Yarrow Shipbuilders in Scotland on 20 June 1938 and was commissioned into the Royal Navy two years later. She was designed as a larger version of the preceding Egret class sloop which would allow her to accommodate more anti-aircraft guns. After World War II began, Black Swan had her anti-aircraft armament upgraded. Her older, ineffective machine guns were replaced with Oerlikon cannons and she received additional 2 pounder guns.

Black Swan was the lead ship of a class of four. These ships were employed primarily as convoy escorts during World War II. Of the four, Black Swan, Erne, and Flamingo survived the war. Ibis, the fourth, was sunk by aircraft in 1942. Black Swan and Erne were sold off and broken up after the war, in 1956 and 1965 respectively. Flamingo was transferred to the Federal Republic of Germany in 1959.

Ships of U.K.
Cruisers
Retrieved from "http://wiki.wargaming.net/en/index.php?title=Ship:Black_Swan&oldid=315810"
Categories:
Your location:
To log in, select the region where your account is registered
CIS Europe North America Asia Republic of Korea
Or use Microsoft Login to enter WoT XBOX ecosystem
Log in