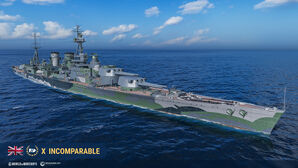 The project of a ship that was enormous for her time—a fast, moderately armored battlecruiser armed with super-powerful 508 mm guns.

Designed as a “large light cruiser,” Incomparable was to represent the absolute extreme in battlecruiser design. The design never had a realistic chance of materializing, and was flawed from the start. She was designed to carry 20in guns, surpassing the problematic 18in guns of the Courageous class. It was estimated Incomparable’s life span to be about 10 years and her design to be quickly surpassed. Her intended speed would be 35 knots, and the engine space needed would make her a massive ship, dwarfing all others in the Royal Navy.

Incomparable is a Tier X British battlecruiser with a different play style than her battleship cousins Thunderer and Conqueror. While they all share decent fire chance and low detection, Incomparable is less armored but much faster than her cousins. On paper she has one of the lowest health pools of the Tier X battleships, however, she has access to Specialized Repair Teams

that allow her to repair a larger amount of damage than her counterparts. Incomparable specializes in ambushing enemy ships owing to her low detection and large, accurate, 508mm guns. She is one of the fastest battleships at Tier X with a base top speed of 33 knots and access to Engine Boost

, but has one of the largest turning circles at the tier.

Designed as a “large light cruiser”, Incomparable is so lightly armored that most battleships in her tier spread can overmatch her thin 25mm bow, possibly penetrating her citadel. Overmatch is somewhat mitigated by the fore and aft end armor belts which feature 102mm plates and an additional 127mm plate on the bow. Incomparable’s heaviest armor belt extends slightly above the waterline, but is only a light 279mm. Above the main belt is a lighter 152mm and 102mm belt allowing for smaller armaments to penetrate and deal damage. Incomparable’s citadel, which sits above the waterline is lightly protected by a 127mm turtleback armor layout. For the ships that can not penetrate Incomparable’s belt or 51mm deck, the superstructure is a standard 19mm, overall making Incomparable an easy ship to damage. With no torpedo bulges and a 32mm plate protecting the 37mm torpedo citadel bulkhead, the Incomparable has the worst torpedo protection in high tier Battleships, even most heavy cruisers have a larger reduction in torpedo damage than Incomparable’s 14%. Careful gameplay and smart use of Hydroacoustic Search

will prolong your life along with taking Vigilance; but with such a long ship and elongated turning radius, it is not difficult for a smart destroyer player or determined CV player to make short work of your hit points if care is not taken.

The main selling point of Incomparable is her main armament. She is armed with 3 twin 508mm turrets, 2 mounted forward and 1 aft, that reload in 29 seconds. They feature 2.0 sigma, alpha damage of 19500 per AP shell and battlecruiser accuracy, making her more accurate than most other battleships. The downside of her main battery is the range, with a base range of 17.6km and detection of 10.6km, Gun Fire Control System Modification 2

is highly recommended to extend the maximum range. Incomparable also suffers from over penetrations with her large AP shells on lightly armored targets, allowing the use of HE to be a viable strategy for engaging light cruisers and destroyers.

Incomparable is unique among the british battleships in having access to torpedoes. She carries 1 set of quadruple torpedo tubes per side, each warhead dealing a maximum damage of 16767. They are identical to the torpedoes found on daring, with a range of 10km, only .6km off of the maximum detection of Incomparable. The torpedo tubes reload in a faster 96 seconds compared to 125, allowing Incomparable to effectively use her torpedo armament in close range engagements.

Incomparable should use her 10.6km detection and 33 knot top speed (which can be further improved by activating Engine Boost) to position herself on the broadsides of heavy cruisers and battleships. Firing at lightly armored targets will result in more over penetrations due to the large 508mm shell size. High explosive may be a preferred ammo choice against lightly armored cruisers and destroyers. Incomparable is lightly armored and has a low HP pool, meaning lower caliber shells will have a higher chance of dealing damage. To combat this, Incomparable is equipped with Specialized Repair Teams

which allows for more HP to be healed than a typical repair party; care should be taken nonetheless, only in name is this considered the British variant, it is more of a hybrid between the US and UK variant. Healing the same damage to the casemates and citadel incurred as the American variant (50% casemate/10% citadel vice the UK variant of 75%/10%) with the healing rate of the British (2% heal rate vice US variant of .5%); unless damage is from fires and flooding you will be hard pressed to heal back the maximum 28K/33.6K(India Delta) HP.

In terms of maneuverability Incomparable has an improved engine acceleration and deceleration time, meaning she benefits from the effects of Propulsion Modification 1

without having to equip it. This allows for Incomparable to mount Damage Control System Modification 2

to extinguish flooding and fires faster. Her rudder shift is one of the fastest out of the Tier X battleships at 16 seconds, but players should make use of her 3km Hydroacoustic Search

to spot incoming torpedoes for herself due to her over 1km wide turning radius and weak torpedo protection. Overall Incomparable is a great flanking battlecruiser built to punish enemy broadsides, as well as quickly redeploying to other parts of the map to support pushes or retreats.

Incomparable is one of the stealthiest battleships in the game. Build to capitalize on her improved accuracy and outstanding concealment while adding to her notably short main battery range.

Incomparable can equip the following consumables:

As a premium ship, Incomparable comes with Default permanent camouflage and a set of permanent combat bonuses.

By the standards of her time, Incomparable would have been a mammoth vessel. Her intended displacement of 48,000 tons dwarfed the newly built Revenge-class battleships (28,000 tons). No British battleship or battlecruiser would be built of that displacement until HMS Vanguard, which was completed after World War II.

This large hull was intended to accommodate engines capable of immense speed and sufficient fuel to give a prodigious range, coupled with armament and ammunition greater than anything before sent to sea. The 20-inch guns which were planned for Incomparable were bigger than the largest guns ever installed on a warship (the 18.1-inch guns of Yamato): 20-inch guns were ultimately only ever to be used on paper. The 18 inch gun tested on Furious was used on monitors during the war, from which complaints were occasionally voiced that it 'caused a shower of sheared off rivet heads' whenever fired. Just as remarkable as the firepower intended was the speed of the ship: if Incomparable had been capable of the 35 knots intended, she would have been faster than almost any battleship or battlecruiser built historically, and indeed faster than many cruisers or destroyers.

She was expected to have a life span of no more than 10 years; Fisher expected her design to be quickly surpassed.

As a warship, Incomparable would have been of dubious tactical value. Her construction would have been a very great expense, and her armour relatively weak. The Royal Navy's experience at the Battle of Jutland in 1916, where three of Fisher's battlecruisers were destroyed, resulted in a decisive turn away from the 'large light cruiser' concept and towards the 'fast battleship'.

Ships of U.K.
Battleships
Retrieved from "http://wiki.wargaming.net/en/index.php?title=Ship:Incomparable&oldid=321536"
Categories:
Your location:
To log in, select the region where your account is registered
CIS Europe North America Asia
Or use Microsoft Login to enter WoT XBOX ecosystem
Log in