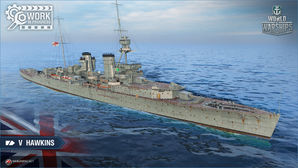 The pioneering ship that led the way for a later class of heavy cruisers. The ship's layout and silhouette had much in common with the British light cruisers of World War I, but Hawkins surpassed them in size and the caliber of her main battery.

Hawkins rewards captains that appreciate her limitations and understand how to turn them to her advantage. Slow and sluggish, she's a ship of half-measures. Captains will need to maintain good situational awareness to get her where she needs to be, avoid cross-fire, bring her guns to bear, and then aim carefully. Even then, she may have difficulty producing significant damage numbers for her team.

Hawkins's armor is fairly good against incoming destroyer and cruiser fire, and even incoming fire from lower-tier battleships (if properly angled). However, a solid battleship salvo will punish her greatly, and captains will often need to rely on her British Repair Party

to get deep into the battle and survive. In addition, her concealment is flat-average for her tier and her lack of firing range forces captains to fight in the open or seek the shelter of islands.

Hawkins's main armament (HE/AP) leaves something to be desired, with 7 190 mm guns in single-gun turret arrangement. Some firepower can always be available quickly, but getting the majority on-target takes skill and patience, especially when aggressively maneuvering (and she can never get all guns on a target). These limitations are compounded when at range, where she often finds herself due to her slow speed. However, in the lower tier battles she engages in, her secondaries actually provide a welcome firepower increase against close-range targets.

In other departments, Hawkins again has pros and cons. A relatively good AA rating for her tier and Defensive AA Fire

consumable will give lower-tiered carriers some difficulty. As mentioned, prudent use of her Repair Party

consumable can bring her "back from the dead" later in the battle. Her torpedoes are too short-ranged to be of much use, but can be a nasty surprise to an unwary foe that gets too close.

Availability of researchable upgrades for Hawkins is as follows:

With the Defensive AA Fire consumable, AA skills, and Hull (B), an AA-built Hawkins can look like a no-fly zone to a Tier IV carrier, Even a Tier VI CV might want to look elsewhere for her prey.

The recommended upgrades for Hawkins are:

is generally preferred due to the already-short fire/flood durations of cruisers. For a AA build, consider the Defensive AA Fire Modification 1

Hawkins can equip the following consumables:

HMS Hawkins was a Hawkins-class heavy cruiser of the Royal Navy. She was built at Chatham Dockyard and launched on 1 October 1917. With the conversion of her sister, Cavendish, to become the aircraft carrier HMS Vindictive (1918), Hawkins became the name ship of her class.

Hawkins was commissioned on 25 July 1919. She spent less than a decade in active service before being paid off at Chatham to undergo a refit. During this refit, her coal-fired boilers were removed and the remaining oil-fired boilers modified. She recommissioned in December 1929, but was decommissioned again in May 1930 and reduced to the Reserve Fleet. She was recommissioned again in 1932, before again being reduced to the reserve in April 1935. The terms of the London Naval Treaty meant that in 1937, Hawkins was demilitarised and had all her 7.5 inch guns and the deck mounted torpedo tubes removed before she was again returned to reserve status. In September 1938 plans were drawn up to utilise Hawkins as a Cadets' Training Ship.

When the Second World War broke out in 1939, Hawkins was rearmed and recommissioned to become the flagship of Rear Admiral Henry Harwood after the Battle of the River Plate. She patrolled off the South American coast, operating as far south as the Falklands. Hawkins also rescued nine of the crew from the tanker British Premier, which had been torpedoed off Freetown by the German submarine U-65. During February 1941 Hawkins was active off the East coast of Africa, supporting the British reconquest of British Somaliland and subsequent pushes into Italian Somaliland from Kenya as part of Force T of the East Indies Fleet. She also captured a number of Italian and German merchant ships attempting to escape the fall of the former Italian territory, including Savoia. She later provided escorts for convoys and intercepted Vichy French and neutral shipping. Whilst off Mauritius her starboard outboard shaft fractured and she lost her screw and shafting. She spent the period between 10 October to 28 October in the Selborne dry dock, before departing on 2 November to refit and repair in the UK. Afterwards, she again escorted ships around the African coast, with periods in drydock for repairs and refits. In June 1944 she returned to British waters, where she was involved in Operation Neptune, as part of the Western Task Force Gunfire Support Bombardment Force A, for Utah Beach. Before this, she had been involved in Exercise Tiger, a disastrous attempt to rehearse the landings. In August she was again designated as a Training Ship.

In 1945 Hawkins was reduced to reserve for the last time. In January 1947 she was allocated for ship target trials, and was bombed by Royal Air Force Avro Lincoln bombers off Spithead. She was sold for scrap on 21 August 1947 and broken up in December that year at the yards of Arnott Young at Dalmuir.

Ships of U.K.
Cruisers
Retrieved from "http://wiki.wargaming.net/en/index.php?title=Ship:Hawkins&oldid=317112"
Categories:
Your location:
To log in, select the region where your account is registered
CIS Europe North America Asia
Or use Microsoft Login to enter WoT XBOX ecosystem
Log in