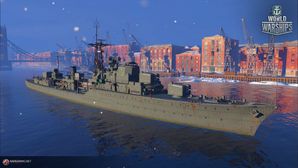 Daring finds herself as one of the strongest destroyers at Tier X. For starters, she carries 6 guns in 3 twin D.P. turrets that rotate 360*, and while her 113mm caliber guns are rather small, thanks to the improved AP auto-bounce and fuse timer, as well as brutal HE shells, she can easily dispatch overconfident DDs who unwisely seek her out as easy prey (and she will dispatch them quickly, thanks to a reload time of just 2.6 seconds stock). She boasts a health pool of 20800, which is fairly mediocre, but she does get 2 heals to keep her guns firing. Daring also has a Short-Burst Smoke Generator

with a short cooldown and short duration, with 7 charges, so smoking up would not be as costly as other dds.

Daring's torpedoes are an oddity, being the same ones found on Minotaur, with a 10km range and 62 knots of speed. While they are mediocre, comparable to those of Z-52 or Grozovoi, she can single fire them, and a skilled player can fire them with surgical precision to quickly take down opposing cruisers or battleships or set floods on them, baiting out their damage control, after which Daring can smoke up and immediately burn down the enemy.

Daring does have downsides, however. Her concealment can only reach 6.00km, which allows other DDs to sneak up on her and deliver powerful blows that could possibly cripple her. She does equip a hydroacoustic search set that allows her to sneak up on destroyers hiding in smoke, but it has a limited range of just 3.0 kilometers compared to the 4/6km of Z-52. Also, she's rather sluggish at 35kts base, which is further compounded by a lack of engine boost to speed things along.

Overall, she's an excellent hybrid DD that makes the best of both worlds of torpedo boats and gunboats. Use these things wisely, and she will reward you handsomely.

As a Tier X ship, Daring has no modules to research.

The recommended upgrades for Daring are as follows:

As a destroyer, Daring should get the standard destroyer flags.

HMS Daring was the nameship of the Daring-class destroyers authorised in 1944. Between 1953 and 1957 they were reclassified as "Darings" and not included in the destroyer total, but from October 1957 they reverted to classification as destroyers. Daring was built by Swan, Hunter and Wigham Richardson on the Tyne and engined by the Wallsend Slipway & Engineering Company. She was laid down on 29 September 1945; launched on 10 August 1949; and completed on 8 March 1952. She served five commissions, was placed in reserve in December 1968 and sold for scrap in 1971. She was the sixth ship of her name in the Royal Navy.

Ships of U.K.
Destroyers
Retrieved from "http://wiki.wargaming.net/en/index.php?title=Ship:Daring&oldid=320762"
Categories:
Your location:
To log in, select the region where your account is registered
CIS Europe North America Asia
Or use Microsoft Login to enter WoT XBOX ecosystem
Log in