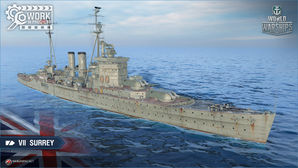 The epitome of design for Royal Navy cruisers of the 1920s. Like her predecessors, Surrey’s main battery consisted of eight 203 mm guns placed in turrets mounted in a super-firing position. The advantage that this project boasted was her armor protection, which perfectly matched the power of the cruiser's main battery guns.

Surrey is a natural successor to Devonshire one tier lower. The two vessels share many common traits, but Surrey is an improvement in almost every regard. This ship is representative of the Norfolk class heavy cruisers, only two of which were built and entered service. In World of Warships, captains will immediately notice just how much of an improvement she really is. The most noticeable and welcome change is the performance of her main battery, which features an improved rate of fire, longer firing range, and slightly better accuracy. Surrey still fires the same shells as Devonshire, and therefore she retains the same low shell velocity for a heavy cruiser. Since the ship has a longer range, it will take longer for shells to reach maximum range; captains are advised to focus their fire on slower, less maneuverable targets such as battleships and aircraft carriers at long range, or refrain from firing to avoid detection.

The preferred shell type of Surrey is high explosive (HE) @mdash; a trait of the branch. They are similar to Japanese high explosive shells having high alpha damage for a cruiser, but with improved fire chance. Captains should aim for the decks and superstructures of battleships and the bows or upper belt armor of enemy cruisers and aircraft carriers. Destroyers will take enormous hits from well-aimed high explosive salvos, but it may require more lead than expected to land hits. While her HE is good, her armor-piercing ammunition is also serviceable. When given the broadside of enemy cruisers, aim for the waterline and try to land as many citadel hits as possible. Should the opportunity present itself, shoot at the upper belt armor of enemy battleships when they expose their sides - do not aim for the waterline, as your shells will shatter, dealing zero damage, and you will have given your position away for no gain. Surrey also comes equipped with a spotting aircraft, which can be used to temporarily extend the range of her main battery. Keep her slow shell velocity in mind when activating this consumable, as even more lead will be required to land long-range shots. A note on her main battery: the guns are housed in turrets with very thin armor; getting even one knocked out will significantly lower the damage-per-minute of her guns.

When in a pinch, Surrey can use her torpedoes in self defense. They should not, under any circumstances, be used in an offensive manner; her firing arcs are very poor, and trying to launch them will expose your relatively weak side armor to enemy guns. The torpedoes themselves are respectable, with good [huh? Ed.] range, mediocre speed, and high damage. Capable of firing one quad-launcher from each side, she is able to deal crippling blows that can be useful when finishing off an opponent, especially a battleship.

While Surrey shares an almost identical armor scheme as her predecessor, and therefore she is extremely vulnerable to nearly every shell in the game. She features the same 25 mm upper belt armor as many other cruisers of her tier, which means that battleship caliber guns (380 mm and above, which are common even one tier lower at tier 6) can easily overmatch her sides, regardless of angle. Her 16 mm bow and stern plating can be overmatched by every single battleship-calibre gun in the game, thus trying to bow-tank any battleship is an almost-guaranteed death sentence. Once the shells punch through her bow (or stern), there is only a relatively thin armor belt protecting her citadel. She does have one ace up her sleeve, though: 27 mm deck armor. This is enough to ricochet 380 mm and smaller battleship guns, but it should not be relied upon as a means of mitigating damage. This armor scheme is sufficient enough to make fighting other cruisers possible, so long as captains are careful not to expose their side. To make up for her relatively weak armor scheme, Surrey has access to Repair Party

, which will restore much-needed health later in battle.

Her anti-aircraft suite is appreciable at Tier VII, but pales in comparison to the likes of the same-tier American light cruiser Atlanta. Captains are provided the choice between equipping their ship with the Defensive AA Fire

consumable (which allows for early warning of incoming torpedoes and detection of enemy ships hidden behind islands or in smokescreens). Choosing the former will give Surrey a respectable anti-aircraft bubble that will help ward off attacks by enemy tier 6 aircraft carriers, but will prove to be less effective against tier 8 carriers.

For a tier 7 heavy cruiser, Surrey sports a decent (but not outstanding) top speed and rudder shift time, but a very tight and admirable turning circle. These combined traits will make dodging incoming fire an excellent way of mitigating damage. In an experienced captain's hands, she will cause a goodly amount of frustration for enemy ships trying to land shots on her.

Lastly, but certainly not the least, is her concealment values. For a heavy cruiser, Surrey is exceptionally stealthy, and captains are recommended to use her good maneuverability and low detectability to get into effective firing positions, most probably behind islands. When coming under concentrated fire, it is advised to hold fire and try to break contact as quickly as possible. Unlike her light cruiser counterpart, Fiji, Surrey does not come equipped with a smoke generator.

Availability of researchable upgrades for Surrey is as follows:

Preference for commander skills is always based on personal play style, but, as with most cruisers, captains should focus on evasion, concealment, and other commander skills that reduce the chance/effects of incoming damage on performance.

Surrey can equip the following consumables:

Ships of U.K.
Cruisers
Retrieved from "http://wiki.wargaming.net/en/index.php?title=Ship:Surrey&oldid=317128"
Categories:
Your location:
To log in, select the region where your account is registered
CIS Europe North America Asia
Or use Microsoft Login to enter WoT XBOX ecosystem
Log in