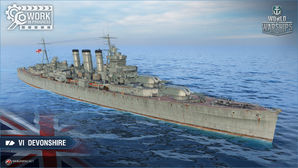 One of the London-class ships—British "Washington Treaty" cruisers of the second series. The large-scale re-equipment of all cruisers of this class which occurred in the late 1930s to the early 1940s provided for changes in the ships' silhouettes, and noticeable reinforcement of their armor protection.

The Devonshire feels like a relief compared to its predecessor at tier V. The gun caliber is now equal to 203 mm and the guns are organized in four turrets with 2 guns per turret in an ABXY configuration. These turrets rotate faster than the single gun turrets on the Hawkins and have workable firing arcs. This way, the Devonshire is very useful for keeping all the turrets on target while kiting away or towards the enemy. The major drawback of the ship is the short range of the guns and the relatively slow shell speed.

The armor at the sides is very thin and you should be aware of your surroundings to not show broadside to the wrong enemy. But the 25 mm midsection deck armor can be a very nice surprise if you keep the range open. The Devonshire is also one of the few cruisers at tier VI that has a Repair Party

consumable. This means that the Devonshire has acceptable survivability.

The Devonshire retains the good AA which is also present on the Hawkins. This can be improved with the Defensive AA Fire

consumable. The Devonshire has better torpedoes with 4 torpedoes per launcher instead of the 2 per launcher on the Hawkins. They can be fired one at the time and have average range and speed. The torpedoes are nice to have and may reward you with an occasional hit or save you from a rushing enemy, but don't rely on them too much.

The Devonshire can be a fun ship to play in the right hands. Be aware of the position of the enemy and position yourself in such a way that you don't sail inside a cross-fire. Try to always angle your armor by kiting towards or away from the enemy. Use HE as default and only switch to AP if a flat broadside is presented at a short-range.

Availability of researchable upgrades for Devonshire is as follows:

The recommended upgrades for Devonshire are as follows:

Devonshire can equip the following consumables:

Ships of U.K.
Cruisers
Retrieved from "http://wiki.wargaming.net/en/index.php?title=Ship:Devonshire&oldid=319639"
Categories:
Your location:
To log in, select the region where your account is registered
CIS Europe North America Asia
Or use Microsoft Login to enter WoT XBOX ecosystem
Log in