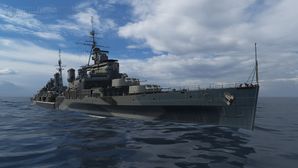 One of the most powerful and largest light cruisers of the 1930s. The ship's main battery comprised twelve 152 mm guns complemented with dual-purpose artillery, torpedo armament, and aircraft-handling equipment.

As a premium ship, Belfast '43 doesn't have any upgrades to research.

The recommended upgrades for Belfast '43 are as follows:

Belfast '43 can equip the following consumables:

As a Premium ship, Belfast '43 comes with Type 10 camouflage that lowers her detection radius, reduces the accuracy of incoming shells, reduces her service cost, and increases the amount of experience she earns.

Ships of U.K.
Cruisers
Retrieved from "http://wiki.wargaming.net/en/index.php?title=Ship:Belfast_%2743&oldid=317250"
Categories:
Your location:
To log in, select the region where your account is registered
CIS Europe North America Asia
Or use Microsoft Login to enter WoT XBOX ecosystem
Log in