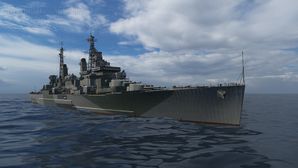 A variant of the British heavy cruiser project, developed at the beginning of World War II and armed with 234 mm main battery guns.

Cheshire was first released for sale in February, 2020.

Cheshire is a Tier VIII British heavy cruiser, being the same tier equivalent to Albemarle.

Cheshire's survivability is one of her weakpoints. Her hitpool being average, she stands out with her raised citadel which extends from the forward turrets all the way to the rear turrets, while being raised amidships. Making matters worse, her plating is only 25mm thick, making Cheshire vulnerable against overmatching from a lot of battleships in her MM spread. What helps Cheshire offset some of the damage taken is her Specialized Repair Teams

, which are capable of recovering up to 48% of the ship's hitpool. However, the amount of damage from citadel hits that can be recovered is very limited, so this tool will serve best against light damage.

Cheshire is armed with six 234mm guns, distributed among three twin turrets with a superfiring pair fore and the third turret aft. Their range is limited with 16.1km and no means to extend it, but the individual shell performance is very impressive. A high Alpha damage, with the AP Alpha per shell being only beaten by Admiral Hipper and her sister Prinz Eugen, as well as the improved penetration on her HE shells, allow Cheshire to deliver hard hitting salvos. Unfortunately, with the gun count being as low as it is, the dpm remains lackluster in comparison to other T8 cruisers, making Cheshire dependent on surprising her targets.

Fortunately, Cheshire has the concealment to surprise her opponents. Getting a surface detection of as low as 9.5km, Cheshire can sneak up on almost all opponents of her type and tier, and should have no issues disengaging if so needed. However, while a lot of the peers of her nation have access to Smoke Generator

, Cheshire enjoys no such luxury. Situational Awareness will be required to not get caught out of position, which with her survivability can end lethal quickly.

With her decent AA protection and access to Defensive AA Fire

, Cheshire can be a difficult target for carriers to choose. However, determined and skilled players will still be able to deliver their ordnance, but at an increased cost.

As a premium ship, Cheshire doesn't have any upgrades to research.

The recommended upgrades for Cheshire are as follows:

Cheshire can equip the following consumables:

As a premium ship, Cheshire comes included with Type 10 camouflage that lowers her detection radius, reduces the accuracy of incoming shells, reduces her repair costs, and increases the amount of experience she earns.

Ships of U.K.
Cruisers
Retrieved from "http://wiki.wargaming.net/en/index.php?title=Ship:Cheshire&oldid=317528"
Categories:
Your location:
To log in, select the region where your account is registered
CIS Europe North America Asia
Or use Microsoft Login to enter WoT XBOX ecosystem
Log in