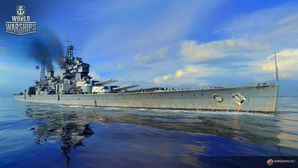 One of the preliminary versions of the King George V-class ships armed with 381 mm main battery guns. She had features characteristic of a next-generation battleship, namely relatively high speed, thick horizontal armor, and dual-purpose artillery.

Tier VIII's Monarch plays much like predecessor King George V a tier below, with noticeable improvements in the calibre of her guns and anti-aircraft suite.

Unlike the King George V with her ten 14-inch guns, Monarch is equipped with a more competitive main battery comprised of nine 15-inch guns in three triple-barrel turrets. Each barrel reloads in a mere 25 seconds, faster than even Bismarck’s eight 15-inch guns. However, Monarch’s secondary battery leaves something to be desired, unlike her German peer; it isn't worth investing upgrades or commander skill points in improving. Her anti-aircraft battery has a somewhat similar story, with a weak long-range bubble but a fairly strong mid-range one. Monarch won't be able to deter determined airstrikes on her own — especially from equal tiered aircraft carriers or higher — but she can make them costly with Advanced Firing Training and/or AA Guns Modification 1.

Out of all the Tier VIII battleships, Monarch also has the least health, lagging behind her contemporaries by a good six thousand hit points or more. She also has a large superstructure which is easy to hit with high explosive shells; she is more akin to a butterfly than royalty and should seek to avoid the limelight. Her health and squishy superstructure mean that Monarch does not take hits very well, and should not attempt to tank damage from multiple sources simultaneously.

While Monarch’s guns stack up damage rather well, don't count on racking up citadels on enemy battleships. The comparatively lower caliber of Monarch's guns (15 inches vs. the 16 inches found on North Carolina and Amagi) hurt her penetration against contemporary battleships. Instead of shooting at their waterlines, captains should shift their aim a little higher in order to strike an enemy battleship above their main belt armour. Unfortunately, her main guns can only reach out to a range of 18.1 kilometres. It is a good thing she has access to the Spotting Aircraft

consumable, which can extend her range out by 20% for a short time.

It is not Monarch’s guns that make her fearsome, however. Fully kitted out in a concealment build, Monarch can have a detection range of 11.5 kilometres, making her the stealthiest battleship in her tier spread. This concealment mitigates her relative fragility and the limited range of her main guns. It allows Monarch to pick-and-choose her fights; to control her engagements to a higher degree, and run away when needed. All in all, this is what makes Monarch unique. It turns an otherwise average and uninspiring battleship into one that can move around and impact the outcome of a match with a greater degree of flexibility than many of her contemporaries.

The recommended upgrades for Monarch are as follows:

Monarch can equip the following consumables:

Captains have a choice between a Spotting Aircraft

; the former is more effective due to the limited main battery range of Monarch.

This ship shares its name with an Orion-class battleship Monarch that was built in 1910 and sunk as a target in 1925. The 15 inch (381mm) gun designs for the King George V were rejected by the Admiralty due to the desire to remain within the terms of the Second London Naval Treaty signed in 1936 and prevent a costly arms race between major naval powers. While these designs were preferred by the Admiralty, the Royal Navy needed new modern Battleships quickly, and couldn't afford to wait until April 1937 to lay down the first new ships. This deadline for Japan and Italy agreeing to the treaty would have allowed the Royal Navy to invoke the escalator cause

In World of Warships, Monarch is a very loose interpretation of Design 15C of 1935, one of the designs that was put forward alongside those that would later develop into the King George V-class battleships. It is arguable that Monarch doesn't represent design 15C at all due to the numerous major historical inaccuracies and differences from the actual design.

Ships of U.K.
Battleships
Retrieved from "http://wiki.wargaming.net/en/index.php?title=Ship:Monarch&oldid=323786"
Categories:
Your location:
To log in, select the region where your account is registered
CIS Europe North America Asia
Or use Microsoft Login to enter WoT XBOX ecosystem
Log in