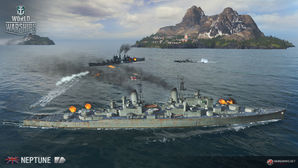 A light cruiser design created on the basis of experience obtained during World War II. In comparison to previous classes of Royal Navy ships, she had greater dimensions, dual-purpose main guns, and reinforced anti-aircraft and torpedo armament.

The main improvement from Edinburgh to Neptune is a vast increase in firepower. She upgrades from the Mk XXIII 152mm rifle of her immediate predecessors to the Mk XXV, which — with a base reload time of just 5.0 seconds — represents full 50% boost in her rate-of-fire (70% with the appropriate upgrade). The traverse rate sees a noticeable improvement. The range is improved as well, though the shells still lose velocity quickly, making it a challenge to hit anything smaller than a battleship at long range.

Other aspects of Neptune’s firepower are greatly improved as well. She carries two quadruple-tube torpedo launchers per side, allowing her to devastate unwary ships that attempt to pursue her, sit in smoke, or come around islands. Finally, Neptune’s anti-aircraft suite is one of the most punishing in the game — especially with a commander who has the Level 4 skill Manual Fire Control for AA Armament — as her new Mk XXV main battery guns also function as dual-purpose guns and provide a significant contribution to her AA.

, but her detection range is notably higher; indeed, Neptune has the highest detection radius of all British cruisers. While this impairs her ability to close with and actively hunt enemy destroyers, it isn't a serious handicap as long as her commander has the Concealment Expert skill.

On the downside, she has slightly less armor protection than Edinburgh, but — more worryingly — a much higher citadel. A Neptune exposed with her broadside to enemy cruisers with armor-piercing rounds loaded — or battleships at any angle — can expect to take heavy damage if not wiped off the map in short order. To make matters worse, she is larger and responds more sluggishly than Edinburgh, making it more difficult to dodge enemy fire. Combined, these make it much harder to give up Smoke Generator

Neptune is capable of performing well as long as her captain keeps her guns pumping rounds at enemy cruisers and destroyers and keeps her highly vulnerable citadel hidden away from enemy battleships and heavy cruisers.

Unlike Edinburgh, Neptune can't get her detection radius low enough to match her Surveillance Radar

range. She's still best when fully rigged for stealth; the question becomes how many points her captain is willing to sink into her anti-aircraft suite.

The recommended upgrades for Neptune are as follows:

should be mounted when specializing for AA duties.

is an easy choice for additional specialization in AA duties, making carrier players rethink their decision to send their planes into the airspace above Neptune.

The same skills that benefited Edinburgh will continue to be of great use to Neptune. At Level 1, commanders are encouraged to take Last Stand to ensure Neptune retains at least some maneuverability even when her engines or rudder are knocked out. At Level 2, Priority Target is a key skill as it allows players to know when it is (theoretically) safe to expose their broadside in a turn without severe punishment. Other skills of interest for Neptune at Level 2 are Consumables Enhancements (to lengthen the duration of either her smoke screen or radar consumables) and Expert AA Marksman (a good team-play option that bolsters her AA suite). At Level 3, the key skills are Adrenaline Rush and Superindendent, both of which are highly recommended. Captains who find themselves relying heavily on her torpedo armament may also be interested in taking Enhanced Torpedo Explosive Charge. At Level 4, the key skill that captains should prioritize is Concealment Expert in order to further enhance Neptune’s already great concealment. Captains may also be interested in taking AA Gunner (another good team-play option that gives an additional boost to an already solid AA suite) or Radio Location (to improve situational awareness, particularly against outflanking destroyers).

Neptune can equip the following consumables:

) signal in order to maximize Neptune’s AA output. Regardless of configuration, India Delta (

) signals are also recommended for use. X-Ray Papa Unaone will increase the action time of her smoke allowing a smokescreen-equipped Neptune to produce longer curtains of smoke, giving her more space to move around as well as technically increasing the total time she could potentially spend hidden within her own smoke so long as she finds herself within the final puff of smoke as the first puffs start to dissipate. 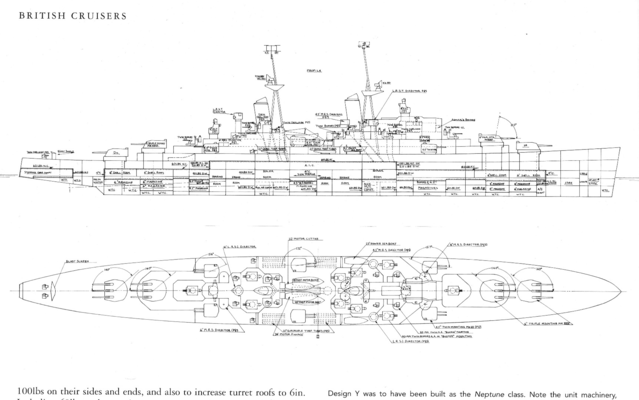 Side and top down plan of "Design Y", or Neptune (as it was known later during it's development).

This ship is not to be confused with the Leander-class Neptune; Neptune as it appears in World of Warships was also known as "Design Y" of the 1944 Cruiser Design.

The 1944 New Construction Programme for the Royal Navy called for the building of five, later increased to six new cruisers. Originally, these were to be the design N2 cruiser from 1943, armed with eight 5.25-inch (133mm) guns. However, the new First Sea Lord (Admiral of the Fleet, Sir Andrew Cunningham) insisted upon the new cruisers being armed with at least 6-inch (152mm) guns, which required the development of a new more modern gun and mount.

Initially decided to be a cruiser with low angle 6-inch guns, Design Y as it was in November 1944 was armed with the new triple Mk.XXV turret, allowing the new 6-inch/50 QF Mk.V guns to be used in an anti-aircraft role, with an elevation of 80°. This was alongside the dual purpose secondary armament of 6 twin 4.5-inch (114mm) turrets of new construction, and a lighter anti-aircraft suite of ten twin 40mm Bofors and fourteen twin 20mm Oerlikons. The twin 40mm Bofors would housed in the new 'Buster' (Bofors Universal Stabilized Tachymetric Electric Radar) mount, however this project was cancelled, echoing the fate of the cruisers they would have armed. The ship itself was very large, displacing 15,350t at a standard load, and having a compliment of 1,351 crew, being fitted out as a flagship.

By 1946, although design work had progressed, and variations were offered, the Admiralty decided the '1944 cruiser', now known as the Neptune class was out of date, too expensive and too large, so the 1944 cruiser project was cancelled. The design for the new cruisers passed on to the Minotaur class.

The six cruisers planned to be built were allocated the names Neptune, Bellerophon, Centurion, Edgar, Mars and Minotaur. Bellerophon was to be built at the Vickers-Armstrong shipyard on the River Tyne, changing from the Minotaur-class cruiser (Tiger sub-class) she was planned to be originally. 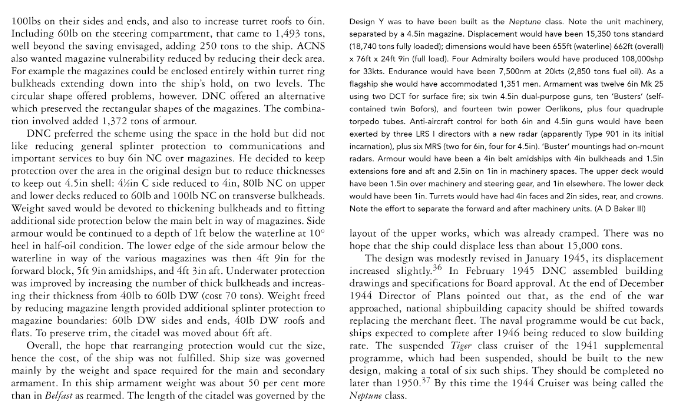 Information on the Neptune, from Norman Friedman's "British Cruisers, Two World Wars and After", page 266.

Ships of U.K.
Cruisers
Retrieved from "http://wiki.wargaming.net/en/index.php?title=Ship:Neptune&oldid=321553"
Categories:
Your location:
To log in, select the region where your account is registered
CIS Europe North America Asia
Or use Microsoft Login to enter WoT XBOX ecosystem
Log in