China | Medium Tank | Tier VIII
Battle Tier
1234567891011
Overview
Mouse over "
▲
Well, the ones further down, of course.
" for more information
[Client Values; Actual values in
▲
Specifically, the mismatch in crew values caused by commander's 10% crew skill bonus. Outside of a crew of 1 commander only, 100% crew is a fiction. The client values, given for 100% crew, will normally be taken into battle with 110% crew skill members aside from specific functions, causing their actual performance to deviate from the expected client value. These differences are taken into account in tooltip boxes.
]
Crew
Mobility
Armor
Armament
General
Type 59

Chinese medium tank. Initially, the vehicle was a copy of the Soviet medium T-54A tank. The Type 59 entered service in 1959. The first tanks manufactured had no gun stabilizer or night-vision device. Later the vehicle underwent several modernizations. Between 6,000 and 9,500 vehicles of all variants were manufactured from 1958 through 1987. 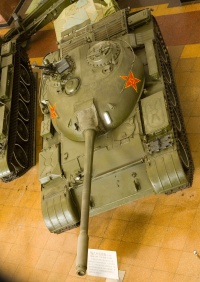 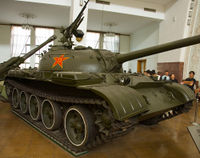