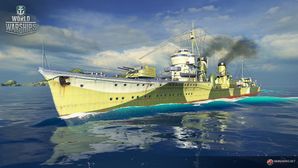 One of the first Fubuki-class destroyers, with an incredible striking power from her three 610 mm torpedo launchers. The ship significantly surpassed preceding-class destroyers in terms of artillery firepower. However, her anti-aircraft defenses were weak, which was characteristic of all Japanese destroyers.

Shinonome is available only as a reward for completing the Honorable Service campaign.

Forgoing all of the intricate details like anti-aircraft rating and handling characteristics, any comparison of the two ships boils down to this: Fubuki has four guns in two twin mounts and 10.0 km torpedoes, while Shinonome has six guns in three twin mounts to go with 8.0 km range torpedoes. Digging deeper, we see that Fubuki’s torpedoes not only travel farther, they hit harder: over 16,000 rated damage each compared to Shinonome’s 14,400 damage apiece. While this makes Fubuki’s torpedoes more dangerous than Shinonome’s, Shinonome’s torpedoes are nothing to sneeze at. They are a comfortable middle ground between Fubuki’s two different torpedo modules, retaining the lower damage output of the Type 8 mod. 1's, but picking up some additional range as well as speed. With her Type 10 camouflage equipped, Shinonome has a detection radius of 6.8 km, making the 8.0 km range of her fish more than workable (especially if her commander has the commander skill Concealment Expert).

Both sister ships share the Japanese destroyer line's slow turret traverse; this weakness can make fighting at close range tricky, especially against American destroyers and their quick-turning guns. Shinonome gets more gun barrels, but has a slower reload time and less range. While she won't be winning many gun duels, the extra barrels give her a bigger damage potential per salvo against weakened enemies. Shinonome’s anti-aircraft suite is even more pathetic than Fubuki’s; captains are advised to simply disable her AA guns and never turn them on.

Overall, captains who are familiar with the play style of the Japanese destroyer line will feel right at home in Shinonome.

As a premium ship, Shinonome doesn't have any upgrades to research.

Shinonome has more guns and shorter-range torpedoes than upgraded Fubuki, tipping the preference more toward a Gun build.

. AA Guns Modification 1 is pointless since her AA consists of a cook with a revolver.

As a premium ship, Shinonome comes with Type 10 camouflage that lowers her detection radius, reduces the accuracy of incoming shells, and increases the amount of experience she earns.

As a premium ship, Shinonome’s main role is to provide faster captain retraining and comfortable gameplay for the player. Therefore, the recommended flags to mount on Shinonome are Equal Speed Charlie London, Zulu Hotel, and Dragon Flag for maximum captain retraining speed. Additionally, Zulu and Papa Papa can also be mounted if the player wishes to get extra credits and free experience from using Shinonome’s premium benefits.

Throughout the early 1920’s, Japan set about designing new destroyers with extended operational range, higher speeds, and heavier weapons than any other destroyer afloat. These designs would ultimately culminate into the “special type” destroyers which would become the standard for all future Japanese destroyer projects. The triple 610mm torpedo mounts from the Mutsuki class destroyers were retained but their location on the ships were changed. Rather than mounting one launcher on the bow and the remainder astern, all torpedo mounts were kept amidship. This prevented the mounts from being affected by seawater and improved seagoing characteristics. Additionally, main gun caliber was increased to 127mm and for the first time on a Japanese destroyer, guns were mounted in enclosed, weatherproof gun houses.

As the designs for the warships neared completion, it became evident that the ships would be over the limit of 1,400 tons displacement. Not desiring to reduce the armament, other components of the ships were reduced or removed instead. Lighter, less powerful machinery was carried, anti-aircraft armament was decreased, magazine storage was reduced, and lighter metal alloys were used during construction. As a result of these changes, the new Fubuki class ships were significantly slower than their proposed top speed of 40 knots. These changes also resulted in a significant reduction of structural integrity which would become apparent in the Fourth Fleet incident during which several “special type” destroyers suffered severe damage to their hulls in a typhoon. Following this, all “special type” destroyers were modified further. The magazine storage and superstructures of the ships were reduced and all hulls were strengthened.

Additional modifications occurred before and during World War II. Shields were mounted on the torpedo launchers to further guard against weather and seawater. The second turret was removed in favor of additional small caliber anti-aircraft weaponry, and additional 25mm and 13.2mm guns were added later in the war. Near the end of the war, all surviving units began to receive additional radar systems.

Shinonome was commissioned in May 1928. Her interwar service was typical and unremarkable. Assigned to DesDiv (Destroyer Division) 12 of DesRon (Destroyer Squadron) 3 in the First Fleet, she sailed for Hainan Island in November 1941 to prepare for imminent hostilities. On 4 December 1941, DesDiv 12 escorted an invasion convoy destined for Khota Bharu in Malaya, remaining on station through 11 December, then returning to Camranh Bay. On 16 December, DesDiv 12 again covered an invasion convoy headed for British Borneo. On 17 December, Shinonome was attacked by a Dutch seaplane which scored two bomb hits. One detonated her aft magazine and Shinonome sank with all her crew, one of the first Japanese warships lost during World War II.

Ships of Japan
Destroyers
Retrieved from "http://wiki.wargaming.net/en/index.php?title=Ship:Shinonome&oldid=316113"
Categories:
Your location:
To log in, select the region where your account is registered
CIS Europe North America Asia Republic of Korea
Or use Microsoft Login to enter WoT XBOX ecosystem
Log in