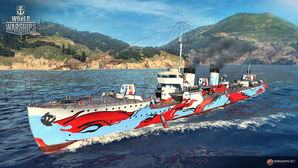 A typical Japanese destroyer that was built using the experience gained during World War I. She boasted a very high speed and powerful torpedo armament. The AA artillery, however, was very weak. She is identical to Kamikaze in all respects save appearance — Kamikaze R’s camouflage is suminagashi-themed.
Kamikaze R was obtainable through Project R from 18 January 2016 to 14 February 2016. She is no longer available.

Kamikaze R is identical to Kamikaze and Fujin and roughly analogous to Tier V tech tree ship Minekaze. She has powerful, fast reloading torpedoes that travel 7.0km at 68 knots with a maximum damage of 14,400 points, making her a serious threat to any ship she can spot. With a base detection of 6.2km, she has a significant spotting advantage over anything else in her tier that isn't a fellow Japanese destroyer, allowing her to deliver her torpedoes to unsuspecting targets.

As a premium ship, Kamikaze R doesn't have any upgrades to research.

Ships of Japan
Destroyers
Retrieved from "http://wiki.wargaming.net/en/index.php?title=Ship:Kamikaze_R&oldid=312629"
Categories:
Your location:
To log in, select the region where your account is registered
CIS Europe North America Asia Republic of Korea
Or use Microsoft Login to enter WoT XBOX ecosystem
Log in