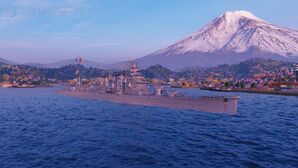 A powerful scout cruiser employed to carry out reconnaissance operations and to protect battleship fleets from enemy light naval forces. Furutaka’s primary distinction from her predecessors was an enhanced artillery armament featuring a pyramid arrangement of turret mounts.

The first heavy cruiser within Japan's cruiser tree and one of the first heavy cruisers in the game, Furutaka carries a powerful complement of six 203mm guns after upgrading from the 200mm, allowing her to deal with anything she encounters. While slow-firing, their large caliber and accuracy allows Furutaka captains to deal large amounts of damage in a single salvo. Fully upgraded, her guns have a range of 13.9km, while her torpedoes can hit 10km after researching the improved range. A common tactic is to close in on an isolated target and launch all available torpedoes before turning around to disengage. While she is faster than most cruisers at her tier, she rapidly slows down when turning, as such you will be the most vulnerable when turning to run away from the opponent.

If possible, captain's are recommended to remain undetected, as Furutaka's poor armor prevents her from tanking damage effectively. Avoid getting drawn into a close range gunfight at all costs, as Furutaka will almost always lose. The ship excels most when firing at unsuspecting targets from a distance. Despite her poor armor, playing Furutaka plays more like a strike cruiser rather than a typical heavy cruiser. Often the best way to play the cruiser, especially in higher tier battles, is to find a battleship or destroyer to support.

Furutaka's weak armor can be compensated for by conducting evasive maneuvers and angling. While her hull can withstand armor piercing shells from other cruisers when angled, most battleships will have little to no problem over-matching most sections of the ship.

Captains should first research the second main battery module for the reduction in reload time it provides. Then the B Hull for the reconfigured main battery, two more torpedo tubes, better maneuverability, health pool, and better AA suite. Next either the gun range buff or the much better mod.2 torpedoes, depending on whether you value her guns or torpedoes more highly.

The recommended upgrades for Furutaka are as follows:

The key skills for Furutaka include Grease the Gears at Level 1, Priority Target at Level 2, Adrenaline Rush at Level 3, and Concealment Expert at Level 4. Captains who use the ship’s torpedoes often may also wish to invest in one or more of the torpedo skills if they have points remaining after investing in her main guns and concealment. The AA skills, particularly Expert AA Marksman, are almost always a good choice for leftover skill points on cruisers. While Pyrotechnician could be taken at Level 2 to improve her shells' fire chances, her rate of fire is too low to properly take advantage of the relative small boost to fire chance per shell. Captains may also with to invest in Top Grade Gunner to improve the slow rate of fire when they find themselves unable to drop off detection using her concealment.

Furutaka captains should mount the standard flags to improve the ship's performance in battle. To improve upon the ship's armaments, India X-Ray (

Following the experimental light Cruiser Yubari, the Furutaka class adapted several of her lessons and was the first heavy Cruiser that entered service in the Imperial Japanese Navy.

Despite numerous efforts to reduce the displacement of this class, they still overshot their designed displacement by almost 1000 tons, with a standard displacement of 7500 tons. With a length of 185m and a width of 16.5m, these ships were heavier and larger than any preceding Cruiser of their Navy.

The original armament consisted of six 20cm/50 3rd Year Type guns in single mounts, those were supposed to deliver heavy strikes in night battles before the ship would then disappear into the darkness again. However problems with the ammunition supply meant that the reload of these guns could not go faster than 30 seconds. Dual purpose armament consisted of four single mounted 8 cm/40 3rd Year Type, and two machine guns caliber 7.7mm were her close range AA armament.

To increase the stability of the ship it was decided to make the Torpedo Tubes fixed into the hull, with three twin 61cm Torpedo launchers on each side of the ship.

Aviation facilities originally consisted of a flying-off platform on turret 4, but it was deemed as insufficient and replaced with a proper catapult during the later career.

Her armor was 76mm thick at her main armor belt, with the deck being 35mm strong. The turrets themselves only had a 25mm strong splinter protection, in order to save weight.

Their machinery allowed for 34.5 knots of speed while having an engine output of 102,000shp, and while going 14 knots they were able to sail for 6000 nautical miles.

Modernizations during the career included a rework of the aviation facilities in 1930, during the next years the AA armament was reworked, which included new dual purpose guns with a caliber of 12cm. In 1936/1937, the main armament received a complete overhaul. The single mounts were all replace by three twin turrets, two quadruple Torpedo launchers on the deck replaced the fixed launchers in the hull and the engine got upgraded to modern standards as well. Wider Torpedo bulges were an attempt to increase the stability, however this was not successful.

Ships of Japan
Cruisers
Retrieved from "http://wiki.wargaming.net/en/index.php?title=Ship:Furutaka&oldid=322164"
Categories:
Your location:
To log in, select the region where your account is registered
CIS Europe North America Asia
Or use Microsoft Login to enter WoT XBOX ecosystem
Log in