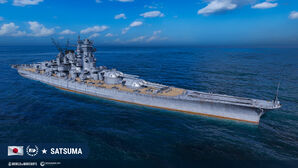 A further development of the Design A-150 super battleships, equipped with an even stronger battery of eight 510 mm guns.

Satsuma was released into the Japanese tech tree on 14 April 2022.

Satsuma is equipped with the Immediate Main Battery Fire Adjustment combat instruction, which reduces main battery shell dispersion for a short period of time. It can be activated after firing 12 main battery turrets at locked-on enemy targets.

Can only be used after successful gun adjustment firing.
Required number of qualified gun shots: 10

Satsuma is the supership of the Japanese Battleship tech tree, armed with eight 510mm guns; the largest in the game. She shares similar characteristics to both Yamato and Shikishima, with the inclusion of the Immediate Main Battery Fire Adjustment combat instruction that increases her strength in accurate long range fire support.

Satsuma features eight 510mm guns (the same guns as Shikishima) housed in 4 twin turrets. These guns have a high range of 27km which is further increased by the Spotter Plane consumable.

While her guns are massive at 510mm, they do not provide any more meaningful overmatch in comparison to Yamato’s 460mm guns. The AP shells overmatch 35mm plating and feature high alpha damage and high penetration. Her HE shells have a 40% fire chance and 85mm penetration. Satsuma’s high-caliber guns allow her to overmatch and deal damage to every ship in her matchmaking spread as long as aiming and dispersion allow.

While her guns are accurate, they feature worse dispersion values than that of Shikishima. This is offset with Satsuma having 8 guns and the ability to use Main Battery Fire Adjustment combat instruction, which decreases maximum dispersion by 35% for 25 seconds. Shikishima has a slow reload, at 30.8 seconds after equipping Main Battery Modification 3.

The turrets on Satsuma are very slow, with a 180 degree turn time of 57.5 seconds. Careful positioning and map awareness are necessary to ensure all guns remain in the fight.

Satsuma's hull features a similar armor scheme to her predecessor Yamato. Her concealment of 14.5 is higher than average for a battleship. Her hull has a high health pool of 119,200 and has an improved torpedo damage reduction of 58.6%. Her overall armor scheme is good, with 57mm deck plating and 32mm bow and stern armor. However, her citadel is very large and retains the ‘cheek’ plating weakness. At closer ranges, high caliber AP shells will penetrate and citadel Satsuma through the cheek of her bow armor.

As a result of her armor layout, Satsuma captains should play her at medium to long ranges.

Satsuma is a slow battleship, with a top speed of 27 knots. Her rudder shift time and turning circle radius is average at 22.4s and 1020m respectively. Early positioning is vital due to her slow speed preventing quick relocation.

Satsuma has poor long/medium AA DPS (161 and 371 respectively). Her low DPS and flak count of 6 means it is not enough to stop an aircraft carrier from striking. Grouping up with allied ships to overlap Anti-Aircraft auras is recommended in games with carriers.

Satsuma is a ship that Yamato players will find familiar. The core gameplay of long range artillery support remains the same even with the addition of 510mm guns and the Main Battery Fire Adjustment combat instruction.

Satsuma fills the classic sniper battleship role, positioning around +15km away from cap circles and providing crossfire onto enemy battleships and cruisers. Satsuma’s poor close range armor scheme and slow hull speed mean she is not a brawler. Because of the overmatch on her 510mm guns, players should mainly fire AP at cruisers and capital ships. The addition of the Main Battery Fire Adjustment combat instruction allows her to provide devastating salvos with improved accuracy, This makes Satsuma much more consistent in her role, providing with correct aiming. Due to the nature of the combat instructions, players will find more success in firing as much as possible to fulfill the requirements for the Main Battery Fire Adjustment.

Satsuma is a mixture of the battleships Yamato and Shikishima. Satsuma delivers accurate 8 shell salvos that feature 35mm overmatch and high alpha with the ability to reduce her dispersion by 35% with combat instructions.

As a top-tier ship, Satsuma has no module upgrades to research.

Ships of Japan
Battleships
Retrieved from "http://wiki.wargaming.net/en/index.php?title=Ship:Satsuma&oldid=325840"
Categories:
Your location:
To log in, select the region where your account is registered
CIS Europe North America Asia
Or use Microsoft Login to enter WoT XBOX ecosystem
Log in