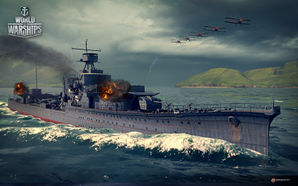 An experimental light cruiser based on an idea to create a fast warship carrying the most powerful armament available while having minimum displacement. She was the first in the Imperial Japanese Navy to be equipped with 610 mm torpedo tubes. By the end of her time in service, Yūbari was reinforced with numerous AA guns.

Yūbari was first sold in pre-order bundles in spring of 2015. She is currently (0.10.1) available for cash, Coal, or Doubloons.

Tier IV Japanese light cruiser Yūbari is an interesting departure from other cruisers at tier. She has an okay health pool, though not nearly as good as Tier III Katori. She has the same slow turrets of all IJN low-tier cruisers, and at Tier IV the 140mm rifles do not show up well against the better armored ships at the tier. Consider them adequate and lament that she has only four rifles. The armament that would shine if it could is her 610mm torpedoes that are faster and much harder hitting than older models. Unfortunately, with a 6km range, only two tubes per side, and narrow firing angles, they are dangerous to employ offensively. To offset this, though, Yūbari has the lowest detectability range of all Tier IV cruisers: 9.6km.

— one of only three ships that can do so[1] — for large buffs to all main and secondary armament (except AA).

A surprising feature of the ship is Yūbari's anti-aircraft capability. While it can hardly be said to be "good" it is the best of any Tier IV cruiser save Giussano, and better than most Tier Vs. In addition to her base AA firepower, she equips Defensive AA Fire

for a couple of extra punches. She is among the fastest and most maneuverable of the Tier IV cruisers — good for dodging.

Yūbari can be played as a gunship, but that is not her main strength. She plays more like an IJN torpedo destroyer without a smoke generator. Read the situation and employ the appropriate weapon and you will find in her a good deal of fun.

As a premium ship, Yūbari doesn't have any upgrades to research.

The recommended upgrades for Yūbari are as follows:

The skill recommendations here are particular to Yūbari. When used as a trainer, shills should be chosen with a view to the ship on which tho commander will ultimately be specialized.

As a premium ship, Yūbari comes with Default permanent camouflage and a set of permanent combat bonuses.

Yūbari captains should mount the standard flags to improve the ship's performance in battle. To improve upon the ship's armaments, India X-Ray ( 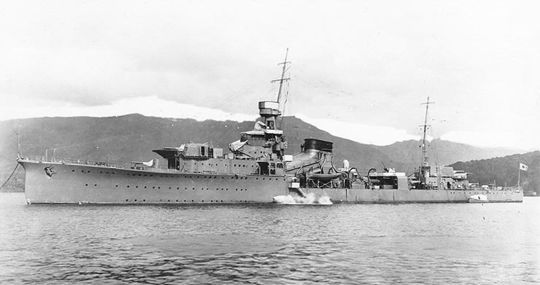 Originally ordered under the 1917 8-4 program, Yūbari was constructed as the main base for the upcoming new and 'modern' Japanese cruiser design of its time. The famous Japanese naval architect Yuzuru Hiraga oversaw her construction, and would later on incorporate his ideas (of weight reduction as well as outfitting ships with maximum firepower possible into a given displacement) into the later cruisers, such as Furutaka.

In 1914, the Japanese government unofficially declared the 8-8 program, which would be in accord with Japan's interests in the Far East. As it's named, the 8-8 program was a plan to build a fleet consisting of eight battleships and eight battlecruisers, and the lifespan of the capital ships being eight years. However, due to Japan's lack of financial and industrial power at the time, the plan was reduced to the 8-4 in 1917. Be that as it may, as the years passed along, Japan's financial and industrial power grew and became sufficient that by 1920, the 8-8 program was restarted. In response to the US refusing to ratify the Treaty of Versailles of World War I, the Japanese began their naval arms race with the US.

In 1922, Yūbari was laid down as an experimental light cruiser scout that would have as much firepower as the Sendai-class cruiser, but with far lighter displacement. Due to the idea of making the ship as light as possible, the armor would be incorporated into the belt armor at 38 mm thick and the deck armor 28 mm, which was far better than earlier 5,000-ton cruiser designs. The engine was designed similarly to a destroyer, with only one smokestack, to reduce overall length and save deck space, and eight boilers feeding into three turbines- this gave Yūbari the desired speed of 35 knots. Additionally, she was originally outfitted with 3x2 14cm/50 3rd Year Type naval guns, but in her 1944 refit, the A position main battery turret (front-most turret) was replaced by a 120mm AA gun. As such, she is seen in-game with the 1944 outfit.

Ships of Japan
Cruisers
Retrieved from "http://wiki.wargaming.net/en/index.php?title=Ship:Yūbari&oldid=321073"
Categories:
Your location:
To log in, select the region where your account is registered
CIS Europe North America Asia
Or use Microsoft Login to enter WoT XBOX ecosystem
Log in