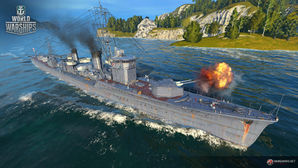 Developed from the Hatsuharu-class destroyers but was equipped with more powerful torpedo armament. However the ship was slightly slower than her predecessors. She was the first of the Japanese fleet destroyers to be equipped with quadruple torpedo tubes.

Shiratsuyu is the Tier VII entry in the IJN "gunboat" branch of the tech tree. She can be played as a gunboat, however, she also plays like an entry in the "torpedo boat" branch, as if unsure to which she belongs.

Shiratsuyu is an improvement upon Hatsuharu in a few small but notable ways.

The first is Shiratsuyu’s main battery guns. She has one more barrel than her immediate predecessor, carrying 5 guns with a longer range. With them she poses a significant threat to other destroyers, should her captain decide to use her guns. They boast high alpha strike potential that can take large chunks out of enemy destroyers, though the rather long reload time prevents her from winning prolonged gun fights against gunboat destroyers. The high fire chance also equals that of Vauquelin. Combined with above-average damage per shell and excellent concealment, Shiratsuyu is more than capable of finding and ambushing crippled destroyers, finishing them off with her main battery. Otherwise, her guns should really only be used when in smoke, when able to break line of sight quickly by ducking behind an island, or when in situations where she has adequate support from her allies without the threat of significant return fire.

Her improved torpedo armament is also of note. Shiratsuyu moves from the two triple-tube launchers found on Hatsuharu to a pair of quadruple-tube launchers. She can also upgrade to the Type 90 torpedo if desired, increasing the punch and speed of her fish. Shiratsuyu also gains access to an improved version of the Torpedo Reload Booster

consumable that drops her reload to only 5 seconds, and has a cooldown of 160 seconds when compared to the 240 seconds of most other ships with this consumable. Using the Booster allows Shiratsuyu to put up to 16 torpedoes into the water in a very short amount of time. However, installing the Booster is not an easy choice as she must give up her Smoke Generator

While she retains Hatsuharu’s low detection radius, her anti-aircraft suite actually gets worse. Shiratsuyu’s speed and rudder shift performance are also a downgrade; while the latter is not really noticeable, the former definitely is. She is highly vulnerable to enemy aircraft and gunboat destroyers that are faster than she is (such as Sims, Kiev, or Leningrad).

Nonetheless, Shiratsuyu is a well-rounded Tier VII destroyer with excellent torpedoes and guns that are more than capable of contributing to her damage output when used judiciously in the right situations.

After the hull, the improved torpedoes and longer range are captain's choice.

is a reasonable choice for a straight torpedo boat build.

Commander skill points are best spent on the level 2 Last Stand skill, which allows the engine and the rudder to function with a penalty when the would usually be incapacitated. This skill is highly advised for all destroyers. Mastering the level 4 skill Concealment Expert, lowers detection range, is also strongly encouraged.

While Shiratsuyu is very much a torpedo oriented destroyer, the subsequent destroyers Akizuki at tier VIII; Kitakaze at tier IX; and Harugumo at tier X are also very much gunboat destroyers. As such, it is advisable to consider resetting captain skills to suit a gunboat destroyer after grinding through Shiratsuyu, or pick up such skills towards the end of the grind, depending on resources available to you.

Shiratsuyu can equip the following consumables:

Shiratsuyu’s improved Torpedo Reload Booster is an appealing choice for veteran captains who are able to forego her Smoke Generator.

Players who wish to spend doubloons can equip Shiratsuyu with Type 17 camouflage that lowers her detection radius, reduces the accuracy of incoming shells, reduces her repair costs, and increases the amount of experience she earns.

Sierra Mike is probably the single most important signal flag that Shiratsuyu captains can equip. Other recommended flags would be Juliet Whiskey Unaone, Juliet Charlie, and — given how important some of her consumables are — November Foxtrot. 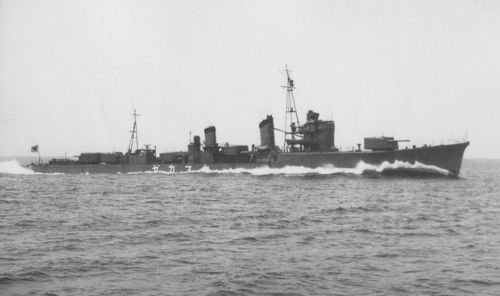 Originally planned to be built as Hatsuharu class destroyers, Shiratsuyu and her sister ships had their design altered following the discovery of the stability issues with the preceding vessels. The draft of the ship was greatly increased while beam was decreased slightly. Her superstructure was also significantly smaller than that on Hatsuharu. Additionally, the destroyer’s armament and armament placement were slightly altered. The second turret was mounted on the aft of the ship and the third torpedo launcher was removed but the existing ones were replaced with quadruple launchers. Shiratsuyu also retained the same machinery used on Hatsuharu but due to the greater displacement, was significantly slower.

Like the Hatsuharu class destroyers, many of the Shiratsuyu class ships had one of their gun mounts replaced with additional small-caliber anti-aircraft weapons. Additional 25mm guns were added throughout World War II as well as small radar systems.

Ten of this further iteration of the Hatsuharu class were built.

Shiratsuyu collided with a tanker and was sunk on 15 June 1944.
Shigure, often considered the luckiest ship in the Japanese fleet, survived every engagement in which she fought, but was finally torpedoed and sunk by submarine off Malaya on 24 January 1945.

Ships of Japan
Destroyers
Retrieved from "http://wiki.wargaming.net/en/index.php?title=Ship:Shiratsuyu&oldid=313117"
Categories:
Your location:
To log in, select the region where your account is registered
CIS Europe North America Asia Republic of Korea
Or use Microsoft Login to enter WoT XBOX ecosystem
Log in