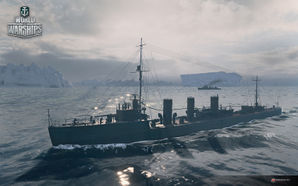 Developed from the Umikaze class. Unlike her predecessor, Isokaze had increased displacement and enhanced torpedo armament. The ship's artillery, though sufficiently powerful, had a low rate of fire which was typical of all Japanese destroyers.

"Shore Wind" is a solid Tier 4 Destroyer that serves as a balance point, leading to both the gunboat line & the torpedo line. She can launch powerful torpedoes at outside of detection range, but one should keep a close eye on the thin margin of error between detection & torpedo range. Isokaze is no slouch in a gunfight either, with HE shells can easily rip apart other destroyers, while AP shells can citadel tier 5 cruisers. Beware of the slow turret traverse. When fighting against carriers, Isokaze's upgraded AA suite can be specialized in. Using the correct flags, skills, and high maneuverability, Isokaze can be a serious pain for carriers to fight.

Isokaze is the base of three IJN tech tree branches:

The recommended upgrades for Isokaze are as follows:

The Isokaze-class destroyers were designed as part of the first phase of the Hachi-hachi Kantai program of the Imperial Japanese Navy. With the commissioning of the new high speed battleships Yamashiro and Ise, escort vessels with equally high speed and blue ocean capabilities were required. Four vessels were built, with the order split between Kure Naval Arsenal, Kawasaki Shipyards in Kobe and Mitsubishi Shipyards in Nagasaki.

The Isokaze-class ships were a slightly larger and updated version of the previous Umikaze class. Externally, the design went to a three smokestack profile, with a curved, rather than straight bow.

Internally, the engines were replaced with heavy fuel oil-fired steam turbine engines. Two vessels (Amatsukaze and Tokitsukaze) used Brown-Curtis turbine engines, and the other two (Isokaze, Hamakaze) used Parsons turbine engines. Advances in turbine design and construction permitted more reliable operation than previously with the Umikaze. The rated power of 27,000 shp (20,000 kW) gave the vessels a high speed of 34 knots (63 km/h), and a range of 3,360 nautical miles (6,220 km) at 14 knots (26 km/h); however, the engines could not be run continuously at over 7,000 shp (5,200 kW), which still considerably limited performance.

Armament was increased over the previous classes, with four QF 4.7 inch Gun Mk I - IV, pedestal-mounted along the centerline of the vessel, two in front of the smokestacks and two to the stern. The number of torpedoes was increased to three launchers, each with a pair of 533 mm torpedoes. Anti-aircraft protection was provided by four machine guns.

Ships of Japan
Destroyers
Retrieved from "http://wiki.wargaming.net/en/index.php?title=Ship:Isokaze&oldid=325381"
Categories:
Your location:
To log in, select the region where your account is registered
CIS Europe North America Asia
Or use Microsoft Login to enter WoT XBOX ecosystem
Log in