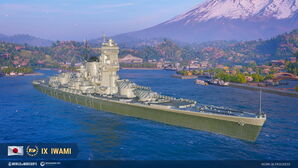 A version of the A-140-J3 "super battleship" project that had a smaller number of main battery guns and more effective dual-purpose artillery and torpedo armament.

Iwami was first released for sale on DD MMM YYYY.

As a premium ship, Iwami has no module upgrades to research.

As a premium ship, Iwami comes with Regular permanent camouflage and a set of permanent combat bonuses.

Ships of Japan
Battleships
Retrieved from "http://wiki.wargaming.net/en/index.php?title=Ship:Iwami&oldid=318773"
Categories:
Your location:
To log in, select the region where your account is registered
CIS Europe North America Asia
Or use Microsoft Login to enter WoT XBOX ecosystem
Log in