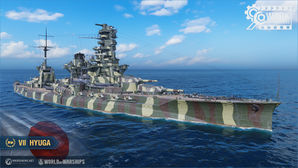 An Ise-class battleship that was a further development of the Fusō-class warships with a different arrangement for her artillery. Heavy reconstruction during the 1930s resulted in the battleship having better speed parameters, stronger anti-torpedo protection, and more solid horizontal armor.

As a premium ship, Hyūga has no modules to research.

is a viable alternative, even with the dispersion penalty, because of the horrible turret traverse rate. PVE players especially should consider a secondary build here with Secondary Battery Modification 1

As a premium ship, Hyūga comes with Default permanent camouflage and a set of permanent combat bonuses.

Ships of Japan
Battleships
Retrieved from "http://wiki.wargaming.net/en/index.php?title=Ship:Hyūga&oldid=321056"
Categories:
Your location:
To log in, select the region where your account is registered
CIS Europe North America Asia
Or use Microsoft Login to enter WoT XBOX ecosystem
Log in