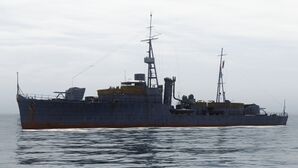 A light patrol gunboat designed for coastal operations. This gunboat was well-armed for her dimensions, including AA artillery. She was not armored and had low speed.

Most of the ship's parameters are quite average.

Availability of researchable upgrades for Hashidate is as follows:

Captains can research the upgraded Gun Fire Control System for extra range, or skip this altogether and research the tier II cruiser, Chikuma.

The recommended upgrades for Hashidate are as follows:

Hashidate can equip the following consumables:

Hashidate captains should mount the standard flags to improve the ship's performance in battle. India X-Ray (

) flags are recommended to improve the main battery's fire chance. To improve the ship’s survivability, captains should mount November Foxtrot (

) flags are recommended to increase the ship’s top speed. 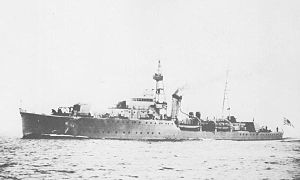 Hashidate was the other only and lead vessel in the Hashidate-class gunboats in the Imperial Japanese Navy, that operated in China during the 1940s.

Hashidate was authorized as part of the Circle Three Plan of 1937, and was laid down at Osaka Ironworks on 20 February 1939. She was launched 10 months later, 23 December 1939, and commissioned into the Imperial Japanese Navy 30 June 1940.

Hashidate would serve most of her time as support for combat operations off of the coast of China, mainly in the 2nd China Expeditionary Fleet’s 15th Escort Group. At the start of Asia-Pacific War, Hashidate participated in "Operation C", the invasion of Hong Kong. Thereafter, she would remain based in the same city for most of the war. She would later on receive an upgrade of five additional Type 96 25 mm AT/AA Guns sometime in 1943, and depth charges sometime in 1944.

On 22 May 1944, Hashidate was sunk by the USS Picuda submarine in the South China Sea, while towing a crippled merchant passenger/cargo ship.

Ships of Japan
Cruisers
Retrieved from "http://wiki.wargaming.net/en/index.php?title=Ship:Hashidate&oldid=316292"
Categories:
Your location:
To log in, select the region where your account is registered
CIS Europe North America Asia Republic of Korea
Or use Microsoft Login to enter WoT XBOX ecosystem
Log in