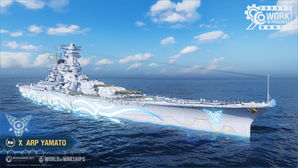 ARP Yamato is a copy of Yamato with a unique camouflage.

As a premium ship, ARP Yamato doesn't have any upgrades to research.

The recommended upgrades for ARP Yamato are as follows:

ARP Yamato should be built for survivability, as it lacks AA power to be worth specializing into and is overall dreadful at brawling range due to its size and sluggishness.

As a premium ship, ARP Yamato comes with Default permanent camouflage and a set of permanent combat bonuses.

The three most important flags are India Delta, Juliet Yankee Bissotwo and India Yankee; all of which will improve your survivability. If the captain goes with the Secondary Build, the addition of Mike Yankee Soxisix will further improve the performance of ARP Yamato's secondaries.

Ships of Japan
Battleships
Retrieved from "http://wiki.wargaming.net/en/index.php?title=Ship:ARP_Yamato&oldid=322029"
Categories:
Your location:
To log in, select the region where your account is registered
CIS Europe North America Asia
Or use Microsoft Login to enter WoT XBOX ecosystem
Log in