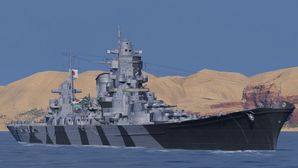 A fast-moving ship armed with 310 mm artillery for her main battery, intended to counter enemy heavy cruisers (Project B-65). This version of the design also featured torpedo armament.

Yoshino is a Japanese supercruiser at Tier X. Armed with 9x 310mm main guns and 16x 610mm long lance torpedoes, she is well-armed for a cruiser of her size. For her size, she is relatively quick and agile, and her main battery packs a punch. Further comprising her arsenal are long-range torpedoes and an effective anti-aircraft suite.

Yoshino can best be described as a sort of "hybrid" between the Tier X Japanese battleship Yamato and cruiser Zao. Her 9x 310mm guns are both powerful and more accurate than most supercruisers. Her HE sports high penetration, allowing her to punch through 50mm of armor found on heavily armored cruisers and battleships such as Petropavlovsk. Her AP also has very good penetration and will frequently land citadel strikes on broadside cruisers. This is somewhat offset by her slower reload, though it is faster than other supercruisers. If her guns weren't scary enough, Yoshino also carries 20km torpedoes that can deal crippling damage to anything they hit. That being said, the torpedoes have a high detection range and thus are easy to dodge. Still, the threat of damage will force enemies to react, which can set up opportunities for Yoshino or her teammates.

However, Yoshino is surprisingly fragile for a ship her size. Her extremely vulnerable citadel means that an ill-timed maneuver can quickly send her back to port. Like other Japanese cruisers, Yoshino also has issues with taking citadel hits through her poorly protected stern. However when properly angled, Yoshino will have no trouble bouncing the majority of enemy AP shots that come her way. Though she has to be wary of BBs with larger than 430mm guns as their AP will overmatch Yoshino's 30mm armor and severely damage her.

Similar to her smaller cousin Zao, Yoshino's play style favors mid to long range combat, whittling opponents down in preparation for a decisive counter-attack. Compared to other kiting cruisers, Yoshino is unique in that she can use both her guns and torpedoes to stall or even defeat major pushes. Careless opponents may see their entire push obliterated by a wall of torpedoes. Even heavily armored ships may rethink their attack for fear of her HE shells ignoring their armor advantage. Yoshino can also pose a threat at very close range due to her large HP pool and formidable torpedo armament, though she has to be extremely careful of her angling due to her extremely vulnerable citadel. However, Yoshino is relatively weak at close to mid-range as higher firepower cruisers can overwhelm her defenses and battleships have no trouble hitting her vulnerable sections of armor. Thus Yoshino players should focus on mid to long range combat, prioritizing out trading the enemy ships until they are weak enough to fall in one decisive push.

Overall, Yoshino is a reliable mid- to long-range kiting cruiser, and will be a worthy purchase for Japanese cruiser fans or those looking for a solid high tier kiting supercruiser.

Despite being a premium ship, Yoshino does have one upgrade choice:

Torpedoes: Yoshino is equipped with the 12km Type93 mod. 3 torpedoes by default. It is recommended to equip the longer 20km Type93 torpedoes instead to complement Yoshino's long-range play style.

The recommended upgrades for Yoshino are as follows:

This is the general recommended build to give Yoshino the most versatility in her play style. Players who want to use Yoshino as a dedicated long-range damage farming cruiser can take Steering Gears Modification 2

in slot 5 to enhance her dodging capabilities.

Yoshino should always invest her first 10 points into these skills. Grease the Gears makes her sluggish turrets rotate faster, Priority Target helps players be aware of potential enemy attacks, Adrenaline Rush provides extra firepower, and Concealment Expert helps with positioning. Though Top Grade Gunner is taken if the player intends to go for full damage farm from the start.

After taking these core skills, players should decide if they want to pursue a balanced traditional build or go the full damage farm build. The traditional build maximizes concealment while moderately buffing her firepower. It is the recommended build for most players:

For players wanting to maximize their damage output, the following build eschews concealment for maximum firepower. Players can expect more high damage games, though they should be careful when maneuvering as they often will be turning in full view of the enemy.

Yoshino can equip the following consumables:

will compensate for her poor maneuverability when dodging torpedoes.

charge compared to other cruisers.

As a premium ship, Yoshino comes with Default permanent camouflage and a set of permanent combat bonuses.

Ships of Japan
Cruisers
Retrieved from "http://wiki.wargaming.net/en/index.php?title=Ship:Yoshino&oldid=321106"
Categories:
Your location:
To log in, select the region where your account is registered
CIS Europe North America Asia
Or use Microsoft Login to enter WoT XBOX ecosystem
Log in