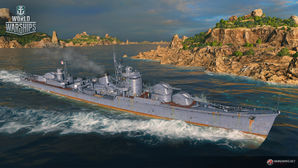 A V7 project destroyer. This ship was a further development of the Akizuki-class destroyers. Compared to her prototype, she had a higher speed and carried more powerful torpedo armament.

In many ways, Kitakaze is comparable to her predecessor, Akizuki, and a straight upgrade in most regards. She improves on Akizuki's speed, maneuverability, torpedo launchers, concealment, and adds access to the Tier IX upgrade slot. Players who enjoyed Akizuki should feel right at home.

Kitakaze has four main gun turrets, each with two guns for a total of eight 100mm rifles. These guns provide most of her offensive firepower, especially considering their blistering three second base reload. This reload can be further lowered by selecting upgrades and skills — to 2.5 seconds (excluding the effects of Adrenalin Rush). Normally, a 100mm HE shell would not be capable of penetrating more than 17mm of armor without the Inertia Fuse for HE Shells skill. However, all Japanese 100mm HE shells have 30mm base penetration without IFHE, and 37mm with it. These guns are lethal.

Kitakaze has a sextuple torpedo launcher. With her Torpedo Reload Booster

active, she can put twelve fish in the water during a short period of time. However, this launcher has a very long reload time — more than two and a half minutes — reducible to a little over 2 minutes: still a very long reload. Kitakaze's torpedoes are a useful tool to have in combination with her main battery firepower.

In addition, Kitakaze gains an extra three knots of speed in comparison with Akizuki, a second off her rudder shift time, better concealment, and slightly better AA.

Fans of Akizuki should greatly enjoy Kitakaze, as she essentially shores up some of Akizuki's key weaknesses like speed while also improving as a whole. She is a strong ship for anyone who appreciates the play style of a gun focused destroyer.

Captains may prioritize researching the Gun Fire Control System earlier or later. Since torpedoes are more of a secondary focus, leave them for last, though more torpedo-oriented captains may want the Type93 mod. 3 sooner.

While her torpedoes are very dangerous indeed, it is difficult to justify a full Torpedo build. Best to stay with a Gun build.

The recommended upgrades for Kitakaze are as follows:

Kitakaze's Priorities are survival and Guns.

Players who wish to spend doubloons can equip Kitakaze with Type 19 camouflage that lowers her detection radius, reduces the accuracy of incoming shells, reduces her service costs, and increases the amount of experience she earns.

The Super Akizuki-class destroyer (超秋月型駆逐艦 or 改秋月型駆逐艦, Chō Akizuki-class or Kai Akizuki-class) were a projected class of destroyer of the Imperial Japanese Navy (IJN), developed during the Second World War. The intention was to develop a faster destroyer based on the Akizuki class. The IJN Technical Department (艦政本部, Kansei-hombu) gave them the project number V7. However, the project was cancelled with none of the proposed ships being completed, because of the continued Japanese defeats.

The 10 cm/65 Type 98 naval gun was only equipped with high-explosive ammunition; the AP shell was invented by WG.

Ships of Japan
Destroyers
Retrieved from "http://wiki.wargaming.net/en/index.php?title=Ship:Kitakaze&oldid=311182"
Categories:
Your location:
To log in, select the region where your account is registered
CIS Europe North America Asia Republic of Korea
Or use Microsoft Login to enter WoT XBOX ecosystem
Log in