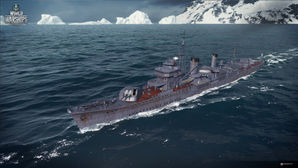 Hatsuharu was a high performance ship despite displacement limitations imposed by the London Naval Treaty of 1930. The ship boasted a comparatively good AA defense. The powerful main battery guns were placed in enclosed turret mounts and could deliver anti-aircraft fire.

Hatsuharu is the Tier VI entry in the IJN "gunboat" branch. Japanese destroyer captains who are moving up to Hatsuharu from Minekaze will find their new acquisition to be something of a mixed bag: her guns are a significant upgrade from those of Minekaze, while it can be argued that her torpedo armament is a downgrade. Not only is she less flexible with only two torpedo launchers, the reload time is very nearly double that of Minekaze; in exchange, Hatsuharu’s torpedoes can eventually be upgraded to longer-ranged with a bigger punch.

Without her improved torpedoes, Hatsuharu is stuck with fish that have a paltry 6.0 km range. This forces Hatsuharu into more of a mid-tier American destroyer play style, requiring captains to utilize islands and smoke effectively to land successful torpedo strikes against enemy capital ships. Hatsuharu plays like a completely different ship once she has her upgraded torpedoes, however. The 10.0 km range of her Type 8 mod. 2 torpedoes is more than workable, and her guns can add notable contributions to her damage when used judiciously in the right situations.

Hatsuharu comes off as the inferior destroyer when compared side-by-side with Fubuki, but things flip back the other way one tier up when the same comparison is made between the successors of both ships (Akatsuki and Shiratsuyu). Captains frustrated with Hatsuharu should remember that she is merely a stepping-stone to better things beyond.

Like the other Tier VI Japanese destroyer, Fubuki, Hatsuharu is painful to play until Hull (B) and the Torpedo upgrade module are unlocked and equipped. Those need to be top priority. Save the Fire Control System module for last, or skip it altogether and move on to Shiratsuyu.

The recommended upgrades for Hatsuharu are as follows:

is viable, but may not be the best option.

Players who wish to spend doubloons can equip Hatsuharu with Type 16 camouflage that lowers her detection radius, reduces the accuracy of incoming shells, and increases the amount of experience she earns. 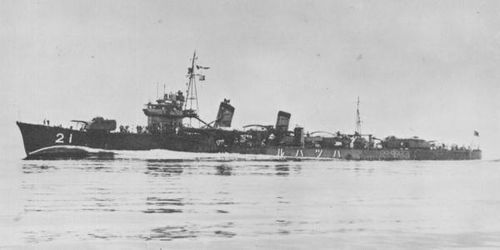 The Hatsuharu-class (初春) destroyers were designed to accompany the Japanese main striking force and to conduct both day and night torpedo attacks against the United States Navy as it advanced across the Pacific Ocean, according to Japan's naval strategic projections. They were to be armed much as the Fubuki-class despite displacing only 1400 tons compared to the 1700 tons of the earlier destroyers. Furthermore their fire control systems were to be more modern than the older systems and suitable for anti-aircraft use. This required the gun turrets to be modified for high-angle fire, which also meant more powerful motors to traverse and elevate the guns more quickly to engage high-speed aircraft. The torpedo launchers were to be given a protective shield to allow for use in heavy weather and to protect against splinter damage. And the Hatsuharu vessels were to be fitted with modern, enclosed command spaces protected against strafing aircraft. These requirements could only be met by adding weight high up on the ship and increased the ship's center of gravity. The only way to adhere to the allotted displacement was to try to reduce the weight of the hull and other equipment below the waterline as much as possible. But this put the ship's designers in a no-win situation as any reduction of weight below the waterline further raised the ship's center of gravity and reduced her stability.

The weight of the hull could generally be reduced by using higher grades of steel that were lighter and smaller for the same strength, reducing dimensions, particularly length, or using advanced construction techniques like welding that saved weight over the conventional riveting. The Japanese used the same high tensile steel for the Hatsuharu class as they did for the older destroyers and chose not to increase the power of the turbines and boilers to achieve the desired high speed, but lengthened the hull to offset the reduced power of the light-weight machinery. The beam was increased to counter some of the extra top-weight, but the draft was reduced to reduce hull resistance, which also reduced stability by lessening the area of the hull beneath the waterline in comparison to the area above it, which was subject to pressure from the wind. Electric welding was extensively used to reduce weight although it was at an early stage of development in Japan and was still problematic.

Extensive weight-saving measures were used during the design and construction of the hull. More frames of lighter construction were spaced more closely together to reduce the thickness of the hull plating and the extensive use of welding (only the longitudinal strength members and a few other parts were riveted) were some of the techniques utilized to reduce hull weight by 66.5 tonnes (65.4 long tons; 73.3 short tons) in comparison to the Fubuki class. The Hatsuharu vessels were some 10 meters (32 ft 10 in) shorter than the Fubuki-class vessels, but weighed 4.9 tonnes (4.8 long tons; 5.4 short tons) per 1 meter (3.3 ft) of hull length compared to the latter's 5.09 tonnes (5.01 long tons; 5.61 short tons) per 1 meter (3.3 ft).

The hull of the Hatsuharu-class vessels retained the general configuration of the Fubuki-class destroyers with a long forecastle and a pronounced flare of the forecastle to improve sea-keeping at high speeds by adding buoyancy and reducing the spray and water coming over the deck. A large bridge structure was located at the aft end of the forecastle deck topped by four fire control stations of various types. Lowest, just above the compass bridge, was the torpedo director (Hassha shikisho), with the gunnery fire direction station (Shageki shikisho) next above. The fire director tower (Hōiban shagekito) was third from the bottom and behind it was the 3m (9 ft 10 in) rangefinder. Each of these was protected by 10mm (0.39 in) plates of Dücol steel against strafing and shell splinters.

For the first time in a Japanese destroyer a superfiring turret was fitted forward of the bridge. It was only a single gun Model A turret, to save weight high in the ship, and was mounted on a deckhouse to elevate it above the twin gun Model B Mod 2 (B-gata kai-2) turret mounted on the forecastle deck. The second twin gun turret was mounted at the rear of the ship on the main deck. These turrets were slightly heavier than the earlier Model A and Model B turrets fitted on the Fubuki’s. All turrets were fitted with the 127mm (5.0 in) Type 3 gun.

The uptakes of the two forward boiler rooms were trunked together aft of the break in the forecastle into the fore funnel while the rear boiler room exhausted into the smaller rear funnel. Both funnels were inclined to the rear to reduce the amount of smoke that might reach the bridge. A tripod mast was fitted between the bridge and the fore funnel. Between the two funnels was the forward 61 centimeters (24 in) triple torpedo tube mount fitted on a low platform. Behind it "was a torpedo locker with its mechanical quick reload system (Kiryoku sōtenshiki jihatsu sōten sochi) for the three reserve torpedoes inside." To preserve lateral stability the aft funnel was offset to starboard while the torpedo mount was offset to port. The reload locker was also offset slightly to port and angled inboard to facilitate reloading. The middle torpedo mount was positioned behind the aft funnel on the center line, but its reload locker was positioned identically to that of the forward mount. Superimposed to starboard and overlapping the middle mount was the rear triple torpedo mount positioned on the rear deckhouse. Immediately behind the mount was its locker positioned on the center line, but angled slightly to the right so that its mount only had to traverse slightly to align with the locker and begin reloading. This was the first ship in history to be fitted with superimposed torpedo tubes, made necessary by the designer's insistence on fitting nine torpedo tubes despite the Navy's requirement for only six.

A small platform that carried a 2m (6 ft 7 in) rangefinder was mounted above the rear torpedo locker and a 90cm (2 ft 11 in) searchlight was mounted on a tower behind the rear funnel. The two license-built Vickers 40mm (1.6 in) (pom pom) anti-aircraft guns were mounted on an elevated platform at the front of the rear funnel. Curiously they were another case where the designer exceeded the requirements laid down by the Navy.

After the 1934 Tomozuru incident demonstrated that many Japanese warships of the era were dangerously unstable due to excessively topheavy desgins, Hatsuharu and Nenohi (the first two ships of the class) were taken in for an extensive refit and the next four which were still under construction were completed to the new design. One of the torpedo launchers was removed, reducing the torpedo armament from nine to six (which had been the Navy's requirement all along). The aft rangefinder was removed, and the single 127mm Model A turret was moved from its forward superfiring location to the emptied deck space where the aft rangefinder had been. The now-unused forward magazine was converted into a fuel tank. The bridge was lowered by 1 deck and its anti-strafing armor was removed, and the funnels and masts were lowered by about 1 meter each. 70 tonnes of ballast was added to the bottom of the hull along the keel, and a mechanism was added to automatically fill empty fuel tanks with seawater so that the center of gravity would stay the same regardless of how much fuel had been consumed.

Following the 1935 4th Fleet incident, in which many ships took extensive typhoon damage and two Fubuki-class destroyers (more heavily built than Hatsuharu) had their bows torn off, all six ships of the Hatsuharu-class were taken in for strengthening of their hulls, adding another 54 tons of weight. These refits resulted in top speed being reduced by 3 knots to 33.5 knots, but accomplished their goal of making the class properly seaworthy.

Six Hatsuharu class destroyers were built and commissioned in the mid-1930s.

DesDiv 27 (Ariake, Yugure) Joined with CarDiv 2 (Hiryu, Soryu) in the Netherlands East Indies to support landings there. Engaged in convoy escort until April, 1942. Participated in the Battle of the Coral Sea. Assigned to the Aleutian diversionary force for the Battle of Midway. Participated in operations against the US landing at Guadalcanal. Continued transport and escort operations to reinforce Japanese garrisons in the Solomons.

Ships of Japan
Destroyers
Retrieved from "http://wiki.wargaming.net/en/index.php?title=Ship:Hatsuharu&oldid=314504"
Categories:
Your location:
To log in, select the region where your account is registered
CIS Europe North America Asia Republic of Korea
Or use Microsoft Login to enter WoT XBOX ecosystem
Log in