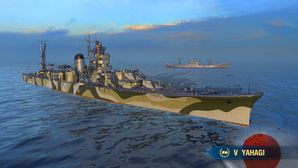 Yahagi was first released for sale on 29 September 2019.

Yahagi is a Japanese light cruiser which sits at Tier V. She is very strong as she has one of the best HE shell performances and one of the best torpedo batteries for a ship of this type and tier. However, this ship does not sail without its quirks.

For starters, Yahagi is very poorly armored and has an extremely high unprotected citadel. If a player dares to turn broadside to any ship, regardless of class, they are almost guaranteed to citadel her when using AP. It is best for her to remain angled or just use her forward turrets and forget about the aft one. However this does have its flaws: the turrets are poorly armored and are prone to frequent incapacitations, if not being outright destroyed. In fact, just about every module is prone to frequent knockouts due to their poor armor, meaning it is absolutely compulsory to have Main Armaments Modification 1

, and even then they still have a chance to get knocked out.

Despite all these flaws, Yahagi does have a few good things that go in her favor. The first thing players will notice are three turrets with two guns each. Yahagi has one of the best fire chances out of any cruiser of this type and tier. One out of every four salvos of HE are almost guaranteed to start a fire, combined with the correct signals and commander skills, this makes her a floating flamethrower. However, as mentioned previously, the turrets are poorly armored and will frequently suffer incapacitations. In addition to this, Yahagi has a 9 second reload, which is an eternally long reload for a light cruiser. The AP shells too are lacking in combat performance, having low penetration and low damage, it is best to stick with HE if any meaningful damage wants to be done.

The torpedo battery is worth a separate mention. These torpedoes are extremely powerful and are almost guaranteed to take out same-tiered battleships with a single salvo. To add to that, they have an extremely long range for this tier and are also decently fast at 60 knots. However, these torpedoes have extremely bad firing arcs, requiring Yahagi to present a nearly complete flat broadside if a player wants to launch them.

Overall, Yahagi is an ok ship if played and used correctly. Take advantage of her torpedo's range and force any destroyers out of its smoke. Use her potent HE shell performance to wither ship's hitpoints away and use her torpedoes to cause flooding and massive damage in a short period of time.

The Inertial Fuse for HE Shells skill allows Yahagi to penetrate Tier V to VII battleship plating. Yahagi already has a 1km range band where she can launch torpedoes without being detected. Concealment Expert enlarges that band to 2.1km.

As a premium ship, Yahagi comes with Type 9 camouflage that lowers her detection radius, reduces the accuracy of incoming shells, reduces her repair costs, and increases the amount of experience she earns.

Ships of Japan
Cruisers
Retrieved from "http://wiki.wargaming.net/en/index.php?title=Ship:Yahagi&oldid=314916"
Categories:
Your location:
To log in, select the region where your account is registered
CIS Europe North America Asia Republic of Korea
Or use Microsoft Login to enter WoT XBOX ecosystem
Log in