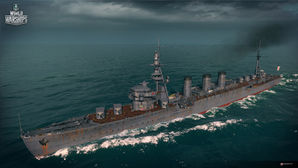 A multipurpose light cruiser that could serve as a scout and a destroyer leader. Compared with the preceding class, Kuma had a greater displacement, reinforced weaponry and increased speed. She retained a weak AA defense that was typical of earlier-period Japanese cruisers.

Kuma is an improvement of the previous Tenryu. Kuma inherits the same rapid fire 140 mm guns of its predecessor in greater number. With more guns she is able to deliver a greater volume of fire making the ship better at surface combat. A pair of double torpedo launchers on each side allows Kuma to deliver 4 torpedoes per broadside. These torpedoes have an excellent range of 7 km and solid damage.

However, Kuma suffers from several weaknesses. First of all, the citadel of the ship sits high above the water line and is easily penetrated by the AP shells of most of her opponents. Moreover, the engine and steering modules are easy to disable. Finally, Kuma has extremely weak AA defense and will have trouble effectively shooting down planes. The addition of the catapult fighter with the B hull upgrade provides a minor improvement.

Kuma is a fun ship to play. The high rate of fire and strong torpedo armament provides the player the tools to inflict substantial damage to ships of any type. Players should be wary about protecting the sides of the ship from enemy fire to avoid citadel penetrations. This is especially true when facing battleships as the AP rounds from any battleship that Kuma will face have a high probability of hitting the citadel, and although giving them a broadside may make them over-penetrate, doing that would expose the citadel to cruiser AP rounds. The torpedo tubes are also poorly protected and may be disabled by enemy fire.

Availability of researchable upgrades for Kuma is as follows:

Key skills for Kuma commanders include Last Stand at Level 1, Priority Target at Level 2, Adrenaline Rush at Level 3, and Concealment Expert at Level 4. Her fire rate is sufficiently high that Pyrotechnician is worth considering for an additional Level 2 skill.

Kuma can equip the following consumables:

Kuma captains should mount the standard flags to improve the ship's performance in battle. To improve upon the ship's armaments, India X-Ray (

Ships of Japan
Cruisers
Retrieved from "http://wiki.wargaming.net/en/index.php?title=Ship:Kuma&oldid=310034"
Categories:
Your location:
To log in, select the region where your account is registered
CIS Europe North America Asia Republic of Korea
Or use Microsoft Login to enter WoT XBOX ecosystem
Log in