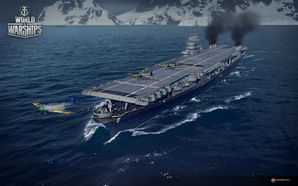 The first U.S. aircraft carrier of special construction. The ship carried a large air group. The carrier's speed was quite high for her type. Her drawbacks included a lack of torpedo protection and impractical arrangement of aircraft elevators, which slowed down the handling of air groups.

Ranger is the first taste of high-tier carrier play in the American carrier line. She has a hangar size of 73 planes when fully upgraded. This is excellent for the tier, because smart play will mean she always has planes available (unlike Tier VI). The jump from Tier VI to VII is huge; in most ship lines, this is the dividing line between pre-World War II and post-World War II designs. Ranger versus Tier VI ships is fairly brutal.

The Stock Build — a single squadron of each type — is recommended for balance. Ranger’s anti-aircraft suite is decent and will destroy a few planes out of a determined attack, but captains should trust their fighters more than their AA. Ranger is relatively slow for her tier, so captains must be always aware of their map position and try to remain near allied vessels but safely away from enemy guns. The fighter squadrons of her most common foe — Hiryu — are stronger due to having two or three squadrons available, so cunning captains must always attempt to engage them near friendly ships so their AA can assist. Strike Build Ranger is a highly controversial ship; carrier captains tend to like her, while their teammates generally don't (as she brings no fighters into a game). Air Superiority Build captains will likely be able to seize control of the skies, but will find themselves seriously lacking when attempting to deal damage to enemy ships; Ranger’s dive bombers still mount only 500 lb. bombs and are very prone to missing all bombs in a drop, even when the drop is done manually.

Ranger’s biggest weakness is her detection radius; once spotted, she doesn't have the armor to shrug off incoming shells. Even cruisers like Atlanta can get large amounts of damage into a Ranger because of the lack of armor near critical areas. Using terrain intelligently and remaining undetected is key; the only other recourse is to rely on teammates for defense. If Ranger is caught alone, it's a death sentence.

For captains who plan on remaining as Stock Build:

For captains who plan on going with an Air Superiority Build:

For captains who plan on going with a Strike Build:

The Dogfighting Expert skill is not generally recommended; however, captains who are frustrated by their performance versus enemy Saipan captains may wish to invest points there. Additionally, due to dive bombers having over 100% chance of causing fires, Demolition Expert is not a recommended skill.

As a carrier at Tier VII, Ranger has access to only Damage Control Party.

Players who wish to spend doubloons can equip Ranger with Type 17 camouflage that lowers her detection radius, reduces the accuracy of incoming shells, reduces her repair costs, and increases the amount of experience she earns.

As a carrier, Ranger can only mount at most four signals at a time and has no risk of detonating. Players should mount Equal Speed Charlie London (for faster XP grinding / increased XP gain per battle), Zulu Hotel (when coupled with Equal Speed Charlie London greatly helps increase commander (re)training), November Echo Setteseven (for better bomber self-defense against fighters and increased AA DPS), and Juliet Whiskey Unaone (to have a better chance at causing flooding and dealing damage via flooding). Players can also choose to equip the Dragon Flag for faster commander (re)training.

USS Ranger (CV-4) was the first ship of the United States Navy to be designed and built from the keel up as an aircraft carrier. Ranger was a relatively small ship, closer in size and displacement to the first US carrier — Langley — than later ships. An island superstructure was not included in the original design, but was added after completion. Of the eight pre-war US aircraft carriers CV-1 through CV-8, Ranger was one of only three to survive World War II, the others being Enterprise and Saratoga. Deemed too slow for use with the Pacific Fleet's carrier task forces, the ship spent most of the war in the Atlantic Ocean.

One of the Ranger’s historical aircraft, the Grumman F4F-3 (currently on the Tier V Bogue), is missing. The Wildcat's markings identify as VF-41 which was based on USS Ranger.

Ships of U.S.A.
Aircraft Carriers
Retrieved from "http://wiki.wargaming.net/en/index.php?title=Ship:Ranger&oldid=252112"
Categories:
Your location:
To log in, select the region where your account is registered
CIS Europe North America Asia Republic of Korea
Or use Microsoft Login to enter WoT XBOX ecosystem
Log in