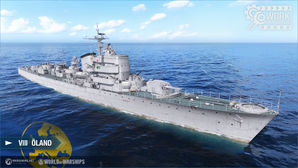 A destroyer built on the basis of the experience gained during World War II. The ship's powerful AA defenses were provided by semi-automatic, dual-purpose main battery mounts and a large number of automatic AA guns.

Öland is the Tier VIII Tech Tree ship of the Pan-European destroyer branch and offers only a few improvements over her Tier VII sister Skåne.

Out of the box Öland seems like an underarmed ship. Her main battery count is the lowest of any Tier VIII destroyer (on par with Ognevoi and six torpedo tubes in total makes her the undisputed lowest in that regard. However, Öland has the means to make up for the deficient numbers. For one, her main battery offers a high rate of fire with each gun firing 24 rounds per minute, before upgrades are being considered. This gives Öland a competitve dpm compared to her peers. What remains lackluster however is the low main battery range, although this could be compensated for using the captain skill Main Battery and AA Expert.

The torpedo armament is not only the lowest in tube count, but also the lowest in Alpha strike, with every torpedo hitting for just a little over 10,000 damage. This rules out the usage of these in the hopes of devstriking larger targets unless a lucky magazine detonation saves the day. What the torpedoes lack in hitting power they do make up for in speed and range. A long range of 12km and 76kn speed make these very comfortable to use, although the torpedo reload in comparison to the torpedo count is rather long.

In regards to her survivability Öland has many hurdles to overcome. Her hitpool is the lowest of any Tier VIII destroyer and what makes matters very complicated is the lack of the Smoke Generator

consumable to restore some lost hitpoints, but this tool can not help Öland when caught out in an unfortunate location.

High continuous AA values, a good amount of flak, as well as access to the Defensive AA Fire

consumable with no trade offs mean that Öland can be a costly target to strike for an aircraft carrier. Unfortunately Tier X carriers will still be able to overcome Öland's defenses and hit her hard, which given her low hitpool will make every bomb, rocket or torpedo hit a painful loss.

Öland's playstyle depends a lot on opportunities and team support. She can engage destroyers but it can cost her dearly, and going anywhere without an exit route is an invitation for the enemy to send Öland back to port. Capture points can be contested, but the lack of smoke should be compensated for by always keeping the situation in check, and disengaging as soon as the situation goes out of control.

Availability of researchable upgrades for Öland is as follows:

Upgrading to the (B) Hull should be priority, as Öland's low hitpool should take any improvement it can get.

The recommended upgrades for Öland are as follows:

Players who wish to spend doubloons can equip Öland with Type 18 camouflage that lowers her detection radius, reduces the accuracy of incoming shells, reduces her repair costs, and increases the amount of experience she earns.

2 Penhoët boilers and 2 sets of turbines

Splinter protection for the bridge and machinery compartments

Already during World War 2 the Swedish Navy considered building new destroyers to fill up the ranks of the otherwise mostly outdated ships. Being able to observe the events of the war while not actively participating gave the designers the opportunity to implement lessons learned while not being under large stress like for example the Kriegsmarine.

The hull was overall 112m long and 11.2m wide, with a standard displacement of 3.4m. At such dimensions these ships would displace 1,880 tons, although a full load would increase this number to 2,250 tons. A feature that was uncommon to almost all navies at that time was the usage of splinter protection for the hull, with large sections being covered with thin armor that would increase survivability agianst small arms fire and near hits.

The main armament consisted of four guns, distributed evenly in two turrets with one on each end of the ship. Each of the turrets housed two 120mm L/50 Model 1942 guns, which would fire a 23.5kg heavy shells at ranges up to 19.1km. The loading mechanisms of these guns allowed a rate of fire of up to 20 rounds per minute, and the elevation angles made these guns suitable for anti-aircraft-usage, an important feature of this class. The torpedo armament was compared to that of other navies very light. Only six 533mm torpedo tubes in two triple launchers, placed on the centerline of the ship, were installed.

The light AA armament followed the principles of the heavy AA armament, and was planned in from the very beginning in high numbers. Three twin mounts of the famous 40mm Bofors as well as seven single mounted 25mm Bofors guns made up the automatic AA weaponry.

The propulsion consisted of two boilers and two sets of turbines, which generated up to 44,000 shaft horsepower each for a maximum speed of 35 knots. Fuel tanks with up to 300 tons capacity would permit a 2,500nm cruising range at a speed of 20 knots.

Ships of Europe
Destroyers
Retrieved from "http://wiki.wargaming.net/en/index.php?title=Ship:Öland&oldid=317564"
Categories:
Your location:
To log in, select the region where your account is registered
CIS Europe North America Asia
Or use Microsoft Login to enter WoT XBOX ecosystem
Log in