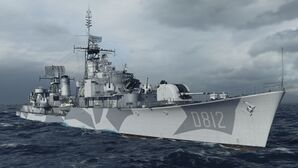 The lead ship in a series of "submarine hunters" used by the Dutch Navy. The ship carried various anti-submarine weapons as well as 120 mm Bofors dual purpose naval guns, one of the most effective pieces of armament during the post-war period.

Friesland was first released for sale on 4 Sep 2019. She is no longer available for sale, having been replaced by her Netherlands counterpart Groningen.

Groningen is a ship of the Dutch in-game nation with identical characteristics. She was first released for sale in August 2021 and can also be researched for 1,000,000 Free XP

Friesland is a Tier IX ship representing the European branch. She is equipped with only two dual mount gun turrets. She has a quick reload time and a variety of consumables at her disposal. Uncommon for destroyers in this game, she is not equipped with a torpedo armament.

Friesland is an interesting take on the gunboat destroyer playstyle, giving up torpedoes for extremely fast firing guns and powerful hydro. With her US style Smoke Generator

, she can farm enemy ships for long periods of time from the safety of her smoke. Her powerful Hydroacoustic Search

both protects her from torpedo attacks while discouraging most ships from getting close. Access to Defensive AA Fire

also heavily discourages all but the most determined carriers from striking her. Due to her slow shells, Friesland ideally wants to position 8km to 10km away from enemy cruisers and battleships. Close enough where she can easily land shells, but not so close where they can rush her and exploit her lack of torpedoes. Make sure someone else is providing constant spotting before you smoke up and farm; smoking up only to lose vision on your target can lead to awkward moments of silence.

Her biggest worry are radar cruisers, especially the long range 12km radars mounted on Russian cruisers. The threat of radar can force Friesland out of her smoke, making her more vulnerable due to her slow speed and sluggish handling. She is relatively easy to hit and will take significant damage if the player is not careful. Her mediocre concealment means she can struggle to force engagements against stealthier destroyers, though she comforably outguns the vast majority of them. The few exceptions including French destroyers, Russian destroyers, and Smaland

Though a solid ship by herself, Friesland can also function as a excellent support vessel. She can lay down smoke for her allies, letting them fire from relative safety while she spots enemy ships, screens for torpedoes, and even provide effective anti-air support.

Overall Friesland and her sister ship Groningen are great ships, capable of locking down large areas with their immense firepower and long lasting smoke.

As a premium ship, Friesland doesn't have any upgrades to research.

The recommended upgrades for Friesland are as follows:

As a premium ship, Friesland comes included with Type 10 camouflage that lowers her detection radius, reduces the accuracy of incoming shells, reduces her repair costs, and increases the amount of experience she earns.

HNLMS Friesland (D812) (Dutch: Hr.Ms. Friesland) was a destroyer of the Friesland class. The ship was in service with the Royal Netherlands Navy from 1956 to 1979. The destroyer was named after the Dutch province of Friesland and was the fourteenth ship with this name. In 1979 the ship was taken out of service and later broken up. The ship's radio call sign was "PAJF".

Friesland was the first ship of her eight-member class of anti-submarine warfare (ASW) destroyers, built for the Koninklijke Marine (Royal Netherlands Navy). Frieslandwas laid down at NDSM on 17 December 1951 and launched on 21 February 1953. She was completed and commissioned into service with the Koninklijke Marine on 22 March 1956 as Friesland (D 812).

Soon after entering service, Friesland made a visit to Leningrad in the USSR along with the older destroyer Holland, escorting the cruiser De Zeven Provinciën. This visit of July 1956 was the first Dutch visit to the port since 1914. More normal in the career of Friesland was the various duties that came from being the workhorse of the Dutch fleet. Deployments ranged from the North Sea, to the Caribbean, and as far as Dutch New Guinea – which is where the next major event of her career occurred. In 1962, to counter aggressive Indonesia irredentism over West Papua New Guinea, the Netherlands deployed a carrier group to the region centered on the light carrier Karel Doorman. Included with the carrier was Friesland and several of her sisters, who were involved in several actions preventing the landing of Indonesia infiltrators on the island, Friesland specifically preventing on the smaller island of Misool.

Friesland served in the Koninklijike Marine for twenty-three years before being decommissioned on 29 June 1979. Unlike most of her sisters, who were sold to the Peruvian Navy in 1980, Friesland was sold to be scrapped and broken up the same year she was decommissioned.

Ships of Europe
Destroyers
Retrieved from "http://wiki.wargaming.net/en/index.php?title=Ship:Friesland&oldid=317691"
Categories:
Your location:
To log in, select the region where your account is registered
CIS Europe North America Asia
Or use Microsoft Login to enter WoT XBOX ecosystem
Log in