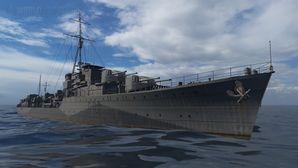 An "M"-class destroyer built for the Royal Navy, but transferred to the Polish Navy shortly after being commissioned. Despite similarities with Lightning-class ships, Orkan boasted stronger AA defenses which were reinforced at the cost of a reduced number of torpedo tubes.

As a premium ship, Orkan doesn't have any upgrades to research.

As a premium ship, Orkan comes with Default permanent camouflage and a set of permanent combat bonuses.

) signals to maximize the fire chance of her main battery shells, as well as Sierra Mike (

) to maximize her ability to disengage when needed. November Foxtrot (

) to maximize her Repair Party

ORP Orkan, formerly HMS Myrmidon was an M-class destroyer of the Polish Navy during World War II. The name translates as "windstorm". She was sunk by the German submarine U-378 on 8 October 1943. There were 179 dead and 44 survivors.

Ships of Europe
Destroyers
Retrieved from "http://wiki.wargaming.net/en/index.php?title=Ship:Orkan&oldid=319481"
Categories:
Your location:
To log in, select the region where your account is registered
CIS Europe North America Asia
Or use Microsoft Login to enter WoT XBOX ecosystem
Log in