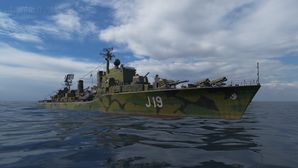 One of the largest and most powerful destroyers in the Swedish Royal Navy, armed with highly effective 120 mm main guns that boasted a high rate of fire. The ship's distinctive feature was her torpedo launchers with different numbers of tubes.

Småland is now preserved as a military museum ship at Maritiman in Gothenburg, Sweden.

Småland is a Tier X European premium destroyer — a sister ship to tech tree Halland, but with some significant differences. Most importantly, Småland has access to Surveillance Radar

Whereas Halland is a well-rounded generalist ship centered around its torpedoes, Småland is far more specialized in her role, and relies much more on her guns. Her torpedo armament (an unusual arrangement of one 5-tube launcher and one 3-tube) is significantly weaker than Halland's as they are loaded with stock Östergötland torpedoes. On the other hand, Småland's main battery is one of the strongest of any destroyer in the game. The firing range is somewhat limited and the ballistics are mediocre at best, but the damage output is very high and she is exceptionally good at starting fires.

, and while her anti-aircraft defenses are strong for a destroyer, she is more vulnerable to aircraft carriers than her sister.

In addition to the exceptional main battery, Småland also has access to Surveillance Radar

, as well as an unusual Emergency Engine Power

consumable with a short duration but a strong speed increase. Like the other European destroyers, she also has a Repair Party

. With this in mind, it is clear that this ship is highly optimized for a particular task - hunting other destroyers. Småland can detect other destroyers with radar, engage or disengage with the engine boost, and outguns almost all other destroyers while also being able to repair incoming damage. Her concealment is only mediocre, but that is not much of a problem in practice since the radar range is far greater than the ship's own detection range - if spotted by an undetected ship, simply activate the radar and the other ship will be revealed.

Since the torpedo armament is weak for Tier X, Småland must rely chiefly on her main battery when fighting larger ships. This can be challenging - the ship lacks access to a Smoke Generator, is fairly big and slow, and the firing range is not particularly impressive. However, she does have one tool that helps with damage mitigation: the Emergency Engine Power

consumable. While it is active, the ship accelerates very quickly to a high top speed, and with appropriate evasive maneuvers becomes a very challenging target to hit, enabling a play style like that of French or Soviet destroyers.

Småland is widely considered to be extremely strong and as such has seen extensive play in competitive settings. Fighting other destroyers is what she was built for, especially in an ambushing role. Fighting other ship classes is more challenging, but the power of her main battery should not be underestimated.

As a premium ship, Småland has no modules to research.

The recommended upgrades for Småland are as follows:

As a premium ship, Småland comes with Type 20 camouflage that lowers her detection radius, reduces the accuracy of incoming shells, halves her service cost, and increases the amount of Credits and experience she earns.

HSwMS Småland (J19) is a Swedish Halland-class destroyer. She and HSwMS Halland were the only ones built of their class. Two more ships were ordered but they were never completed. She was decommissioned in 1979, and since 1987 has been a museum ship at Maritiman in Gothenburg, where she is the largest vessel on display.

Ships of Europe
Destroyers
Retrieved from "http://wiki.wargaming.net/en/index.php?title=Ship:Småland&oldid=317126"
Categories:
Your location:
To log in, select the region where your account is registered
CIS Europe North America Asia
Or use Microsoft Login to enter WoT XBOX ecosystem
Log in