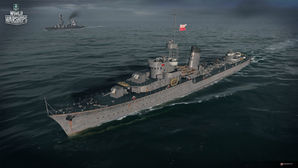 Tier VII's Błyskawica is a stalwart ship that can fill the niche of a premium credit earner for aspiring destroyer captains. Sporting several 120mm guns in fast turning turrets and a reasonable set of torpedoes, she is effective whether fighting other destroyers at close range, performing stealth torpedo attacks on enemy capital ships, or harassing them with long-range fire.

Once her commander has the Level 4 skill Concealment Expert, Błyskawica’s detection radius is low enough that she is capable of the ninja torpedo tactics that characterize the Japanese destroyer line. Her main battery is strong enough to do her well in gunnery engagements with opposing destroyers, especially if they are already down hit points from previous engagements. Błyskawica’s commander can also pick up the Level 4 skill Advanced Firing Training to extend her main battery range significantly; her shells are comfortable to fire at such ranges — with similar shell performance to Soviet counterparts Minsk and Leningrad — but they will struggle to do consistent damage to larger targets. The best she can hope for against enemy battleships and heavy cruisers is to light fires for extra damage output.

As is typical of destroyers, her anti-aircraft suite is abysmal. While she packs a top speed in excess of most other same-tier rivals, Błyskawica’s handling is a mixed bag; she has a good turning radius, but has the least-responsive rudder of all Tier VII destroyers. This particular flaw can be mitigated somewhat with the Steering Gears Modification 1

Whether played as a gunboat or a torpedo boat, Błyskawica is a very balanced ship that can dish out the damage and rake in the credits.

As a premium ship, Błyskawica doesn't have any upgrades to research.

The recommended upgrades for Błyskawica are as follows:

Key skills for Błyskawica commanders include Level 4's Concealment Expert, Level 3's Survivability Expert, and Level 2's Last Stand. When up-tiered into Tier IX games, Błyskawica will need all the extra concealment she can get to avoid being focus-fired by the enemy team; Survivability Expert will provide additional health in case it happens anyway. Last Stand will keep her engines and rudder functioning even while under sustained fire. Skills with additional utility include Demolition Expert at Level 3, Adrenaline Rush and Expert Marksman at Level 2, and Advanced Firing Training at Level 4.

As a premium ship, Błyskawica comes with Default permanent camouflage and a set of permanent combat bonuses.

) signals to maximize the fire chance of her main battery shells, as well as Sierra Mike (

) to maximize her ability to disengage when needed.

Błyskawica, the second of two Grom-class destroyers, served in the Polish Navy during the Second World War. The Grom-class originated from a competition to design and build destroyers for the Polish Navy to succeed the Wicher class. The preceding two-ship Wicher class had been ordered from France's Chantiers Naval Francais, perhaps in part due to an implicit agreement between the the Polish and French governments that France would extend credit to Poland if Poland were to commission the newly-created shipyard. However, the resulting Wicher-class destroyers possessed considerable flaws, including low speed, large silhouettes, and inadequate armor. It seems likely then that this negative prior experience drove the Polish Navy's selection in 1934 of J. Samuel White, a British shipbuilder, over competing designs from other British (Hunter) and French (Ateliers et Chantiers de la Loire) shipbuilders. Two destroyers were ordered on 29 March 1935. On 1 October 1935, the keel of Błyskawica was laid down at White's Cowes, Isle of Wight, shipyard, and the vessel launched on 1 October 1936. Successful sea trials were followed by her commissioning on 1 October 1937.

On 29 August 1939, two days before the outbreak of the Second World War, Błyskawica, Grom, and the Wicher-class destroyer Burza departed from their base on the Baltic as part of the Peking Plan (Operation Peking), an attempt to preserve the vessels in the event of war with Germany. The three vessels, among the most modern elements of the Polish Navy, successfully evacuated with their crews and stores despite being spotted by the German light cruiser Königsberg and a destroyer escort, as hostilities had not yet begun. The flotilla was spotted by German seaplanes on 31 August 1939, but managed to elude them by altering their course during the night. On 1 September 1939, the ships made contact with elements of the British Royal Navy (destroyers HMS Wanderer and Wallace) and proceeded to Leith (Edinburgh's port), having received news that morning that Germany had invaded Poland. The remaining vessels of the Polish Navy in the Baltic were captured or sunk in combat with German forces over the following weeks, with the sinking of both Wicher and Gryf (a heavy minelayer and largest vessel in the Polish fleet) on 3 September 1939.

Having escaped destruction, the destroyers conducted joint actions with the Royal Navy's Home Fleet. Modifications were made to address the new issue of top-heaviness due to the change from the less turbulent Baltic to the Atlantic, resulting in the removal of a searchlight tower on top of the bridge, the aft deckhouse, and the original funnel cap. Additionally, the forward torpedo launcher was removed and replaced with a 3-inch anti-aircraft gun.

Having received these modifications, Błyskawica returned to duty. On 7 September 1939, Błyskawica engaged a German U-boat. In May 1940, Błyskawica and Grom participated in the Norwegian campaign, shelling German positions and downing two German aircraft. During the campaign, Grom fell victim to German aerial bombardment and sank. Błyskawica later took part in Operation Dynamo, the Franco-British evacuation of Dunkirk (27 May - 4 June 1940). Błyskawica was afterward assigned to convoy duty in the Atlantic and Mediterranean theaters, engaging German U-boats and Luftwaffe aircraft.

Returning to convoy duty, Błyskawica escorted vessels including the RMS Queen Mary, being one of the few vessels capable of keeping pace with the liner. On the night of 4 May 1942, Błyskawica proved instrumental in the defense of her erstwhile home of Cowes, Isle of Wight, against a raid by 160 Luftwaffe aircraft. Having been undergoing refit at her shipyard, the ship engaged the Luftwaffe aircraft with ferocity, firing such a volume of rounds that her guns required dousing with water and leaving her stores of ammunition depleted. Błyskawica additionally deployed smokescreens obscuring vision of the town, compounding the bombers' difficulty in delivering ordnance due to the volume of anti-aircraft fire. While both the shipyard and town received significant damage, assessments credited the crew of Błyskawica with preventing further destruction, an evaluation reflected in commemorations in Cowes.

In March 1943, Błyskawica replaced HMS Lightning following its destruction on 12 March 1943 by German E-boats. While deployed with Cruiser Force Q based in Bône, North Africa, Błyskawica participated in the Battle of Ushant (8 June 1944), though her element (HMS Eskimo and Javelin, ORP Piorun and Błyskawica) did not make contact with the German force.

During the war, Błyskawica logged 270,000 km (146,000 nm) and escorted eighty-three convoys, damaged three U-boats, assisted in the sinking of other vessels, and downed at least four aircraft. As part of Operation Deadlight (17 November 1945 - 11 February 1946), Błyskawica used her guns to scuttle surrendered German U-boats designated for destruction.

For her service, Błyskawica received the Virtuti Militari Golden Cross (Class IV) medal, the only ship in the Polish Navy so honored. Decommissioned in 1976, she was later converted to a museum ship and resides at Gdynia, Poland. Błyskawica holds the title of oldest preserved destroyer in the world.

Ships of Europe
Destroyers
Retrieved from "http://wiki.wargaming.net/en/index.php?title=Ship:Błyskawica&oldid=322141"
Categories:
Your location:
To log in, select the region where your account is registered
CIS Europe North America Asia
Or use Microsoft Login to enter WoT XBOX ecosystem
Log in