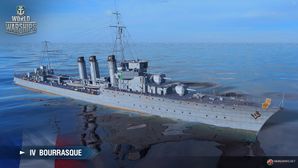 The first French destroyer of the new generation. In order to gain firepower superiority over her foreign counterparts, this ship was armed with powerful 130 mm main guns.

Like her predecessors, Bourrasque also lacks a Smoke Generator. She additionally differentiates herself from other destroyers with a high health pool, a trend that continues with her successors. Unlike her predecessors, Bourrasque has an increased main battery caliber, possessing four 130-mm guns with a long reach and high damage per shell. She additionally receives much upgraded torpedoes in two triple launchers that are very powerful - among the deadliest at her tier - with a maximum damage mere hundreds less than the upgraded Clemson and Shenyang's. Her speed, however, is dead last at 33 knots when discounting Engine Boost but an impressive 41.2 knots with an active Engine Boost and the Sierra Mike signal flag.

Her extensive and powerful armament allows her to dominate the seas. That is not to say it is effortless to play her. Bourrasque must show nearly a full broadside to use all 4 guns. Even then, some destroyers are built with a greater focus on guns than Bourrasque (e.g. Izyaslav, which has 5 barrels and a higher DPM) and, as with any other ship, captains must always take care to choose engagements wisely and use both main battery guns and torpedoes. In addition, Bourrasque's torpedo arcs are similar to her predecessor's. The firing arc does not extend very far forward, making her torpedoes harder and less comfortable to use than the torpedoes on some other destroyers like V-170. Regardless, the high damage and Bourrasque's ability to stealth torp (even without Concealment Expert) makes using torpedoes well worth it. Captains should note Bourrasque's torpedoes take a significant amount of time to reload: a long 75 seconds.

Overall, Bourrasque has the capabilities to destroy enemy ships even while parting with the much coveted Smoke Generator. Everything about her suggests a long reach able to threaten enemies anywhere - a maximum speed of over 41 knots with Sierra Mike, the largest main battery firing range of all destroyers her tier, and the largest torpedo range among all Tier IV destroyers. These properties make Bourrasque a formidable and feared adversary.

Availability of researchable upgrades for Bourrasque is as follows:

It is recommended for captains to first research the Hull upgrade for an additional 2,400 HP on Bourrasque. Captains may decide to then proceed immediately to the next ship on the tech tree, Jaguar. Alternatively, captains may research the PCA n° 4 Mle 2 upgrade for a 10% increase to Bourrasque's already large main battery range.

Unlike the French cruisers, the French DDs don't seem especially apt to lose their steering or propulsion. In Slot 2, Engine Room Protection

becomes viable in Slot 2 as it can decrease the chance of fire and flooding.

Bourrasque was a Bourrasque-class destroyer (torpilleur d'escadre) built for the French Navy during the 1920s.

In the wake of the rejection of the Projet 1920 and its 100mm main battery, the Marine Nationale decided to move to 130mm guns to arm its fleet destroyers (torpilleurs d’escadre). The design was as such revised, this time to a 1,455-tonne design armed with four 130mm guns, in super-firing pairs disposed fore and aft, with designed top speed and endurance remaining the same as before.

Weighing in at 1,320 tons standard and 1,820 tons fully loaded, the main difference of the design from the 1920 iteration was that it featured a main battery of four 130mm/40 Mle 1919 in single mounts, two for and two aft. They fired a 32.05 kg SAP shell at a velocity of 725 m/s. Maximum ballistic range at an elevation of +36° was 18,900 meters, but due to the extremely low velocity of the guns, they suffered from excessive dispersion at long range, and limited the effective range to around 12,000 meters. Rate of fire was also quite low, never exceeding 6 rounds/minute and trended more towards 4-5 rpm. As a whole the weapon was not judged to be very effective. Fire control used a 3-meter coincidence rangefinder, with range data being processed by an Mle 1923B fire control computer. However, due to the protracted development of the fire control system, it was only installed after the ships were completed and entered service (1926-1928), some as late as 1931. Anti-aircraft defense was provided by a 75mm/50 Mle 1924, and two 8mm machine guns. Fire control was limited to on-mount sights.

The design was well armed, but the armament suffered from being unwieldy and having a slow rate of fire coupled with limited effective range. This was further hampered by poor stability in the design, and the variance in turbines used caused the ships to have different performance operationally – although the turbines of all ships were relatively fragile and wore out rapidly, a recurring theme in Marine Nationale destroyers.

Twelve ships of the Bourrasque class were built and served from 1926 to 1950. Seven were lost during WWII.

Bourrasque herself was mined and lost off Nieuwpoort on 30 May 1940 during Operation Dynamo.

Ships of France
Destroyers
Retrieved from "http://wiki.wargaming.net/en/index.php?title=Ship:Bourrasque&oldid=318526"
Categories:
Your location:
To log in, select the region where your account is registered
CIS Europe North America Asia
Or use Microsoft Login to enter WoT XBOX ecosystem
Log in