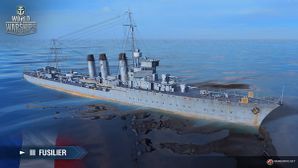 This destroyer design was offered soon after the end of World War I. The reason for the ship's significantly increased dimensions was the wider range of missions the destroyer would be tasked with during military combat.

A definite step up from Enseigne Gabolde, Fusilier similarly embodies the French destroyer traits of high speed in lieu of a Smoke Generator. In contrast to her predecessor, Fusilier has an additional aft main battery turret and two more torpedo tubes. However, her larger size results in less stealth and maneuverability. Her detectability range of 6.46 km doesn't win any prizes, but is only 0.87 km higher (0.78 km with Concealment Expert) than her stealthiest competitor, Phra Ruang.

Despite the substantial armament and health pool upgrade, guns alone cannot win all 1-on-1 engagements with enemy destroyers. While Fusilier maintains much better turret traverse by far at 20°/s (10°/s is typical at this tier), Romulus shoots shells of the same caliber faster and for more damage. This necessitates that players either choose engagements carefully (Fusilier has a potent un-upgraded range of 9.5 km) or land torpedo hits (or both!).

Fusilier's B hull upgrade converts her two double tube torpedo launchers into two triple tube launchers - a significant upgrade. A single torpedo launcher's worth of 3 torpedoes (of which Fusilier has 2) is enough to take out even some full health cruisers, while a high speed of 34 knots (normal for Tier III destroyers) from Fusilier's powerful engines allows captains to charge ahead and deliver devastating torpedo strikes should they desire. Captains should note that, though still usable, the torpedo arcs on Fusilier are narrow in comparison to her predecessor's. Overall, Fusilier's torpedoes are on-par with other same-tiered destroyers - there are better torpedo-boats out there (e.g. Wakatake), but Fusilier isn't built as one - and captains will find her torpedoes helpful and used often.

A final thing of note: Fusilier's A hull has no AA and her B hull has a single 37 mm gun. Though she may face Tier IV carriers, her AA is weak like other destroyers at the same tier.

Despite her lack of smoke, Fusilier is a formidable ship at her tier, and readily feeds on enemy destroyers.

Availability of researchable upgrades for Fusilier is as follows:

The Hull upgrade should be researched for the extra 1,400 HP, which is significant at Tier III, and two additional torpedo tubes.

The recommended upgrades for Fusilier are as follows:

Unlike the French cruisers, the French DDs don't seem especially apt to lose their steering or propulsion. In Slot 2, Engine Room Protection

becomes viable in Slot 2 as it can decrease the chance of fire and flooding.

The 1,350-tonne Projet 1920 torpilleur d’escadre (1,350-tonnes referring to the displacement at normal load) was part of the ongoing French development of destroyer designs immediately following World War One. The design was proposed by the CSM (Conseil Supérieur de la Marine – Superior Council of the Navy) on 1 April 1920 and approved by the navy Minister on 28 April.

The key characteristics of the 1,350-tonne design was sufficient power (about 33,000 shp) to develop a top speed of 33 knots, and an operational range of 3,000 nm at 15 knots. Armament was to be four 100mm guns, with two 75mm guns for anti-aircraft defense and a torpedo armament of 4-6 550mm tubes in two or three twin launchers.

However, this design was not to be built, in the end. The technical committee (Comité Technique) was unhappy with the 100mm cannon, as it was thoroughly inferior to the 120mm model used by the Regia Marina, the Marine Nationale’s Italian rivals (and the most likely future opponent of the French Navy). The decision of the Regia Marina to resume the construction of the Leone-class esploratori leggeri (light scouts), which were armed with eight 120mm cannons, further validated the point of the technical committee, and effectively ended any question of its construction. On 3 July, a further meeting of the committee established in official terms that a 100mm gun was too light to be used as a destroyer gun (and a 138.6mm gun, too heavy), underlining their prior stance.

The rejection of the 100mm gun was not to be the end of the Projet 1920 torpilleur d’escadre, and further development would eventually result in the Bourrasque-class destroyers.

Ships of France
Destroyers
Retrieved from "http://wiki.wargaming.net/en/index.php?title=Ship:Fusilier&oldid=318525"
Categories:
Your location:
To log in, select the region where your account is registered
CIS Europe North America Asia
Or use Microsoft Login to enter WoT XBOX ecosystem
Log in