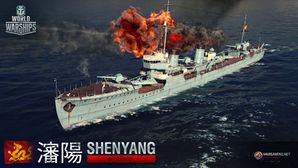 Formerly the Japanese Minekaze-class destroyer Namikaze that had some distinctions from the lead ship of her class. She was transferred to the Republic of China Navy in 1947, with all Japanese armament being demounted.

Shenyang is a versatile destroyer well suited for combat with most other ship classes at her tier. Originally built as a Minekaze-class destroyer, Shenyang inherited her sister-ship’s high top speed but has been equipped with an alternative primary and torpedo armament. Shenyang also carries a quick reloading Smoke Generator

consumable, allowing her to deploy a smokescreen shortly after one has dissipated.

The ship’s primary armament consists of four 127mm guns mounted in a centerline configuration. These guns possess a decent rate of fire, quick traverse speed, and high alpha damage, making them quite effective in combat against other destroyers. The reload time can be further reduced by mounting the Basic Firing Training commander skill.

Shenyang carries six torpedoes in two triple launchers. Her torpedoes have great speed and damage for her tier, making them excellent against larger targets. However, her torpedo range is slightly shorter than the ship’s base detection range, making camouflage or the Concealment Expert commander skill necessary to launch torpedoes undetected. Additionally, the deep water torpedoes mounted on Shenyang and the other Pan Asian tech tree ships are incapable of dealing damage to enemy destroyers due to their lower running depth.

The ship's 39 knot base speed makes her the fastest ship at her tier by a large margin. Captains should take advantage of her high speed and use it to disengage or escape unfavorable situations.The ship's top speed can be further increased through use of the ship's Engine Boost

consumable and by mounting the Sierra Mike (

Availability of researchable upgrades for Shenyang is as follows:

Priority should be given to the upgraded hull for the increased health and maneuverability it provides. Captains should next research the gun fire control system for the added main battery range. The "improved" torpedo module is optional.

The recommended upgrades for Shenyang are as follows:

Key skills for Shenyang commanders include Last Stand, Torpedo Armament Expertise, and Concealment Expert. Captains looking to improve the ship's torpedo armament should choose Torpedo Armament Expertise to decrease the torpedo reload time to below one minute. Captains interested in further improving Shenyang's already strong primary armament may find Basic Firing Training and Advanced Firing Training useful. Other skills such as Superintendent, Survivability Expert, and Jack of All Trades can also be trained to improve the ship's survivability.

Shenyang can equip the following consumables:

Ships of Pan-Asia
Destroyers
Retrieved from "http://wiki.wargaming.net/en/index.php?title=Ship:Shenyang&oldid=317478"
Categories:
Your location:
To log in, select the region where your account is registered
CIS Europe North America Asia
Or use Microsoft Login to enter WoT XBOX ecosystem
Log in