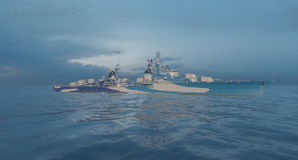 Developed in the early days of World War II, this large destroyer design constituted a further development of the Mogador class. The main distinctive features of these new ships were the different combination of artillery guns and more powerful AA defenses.

Just like the predecessor and half sister Mogador, is a very powerful gunboat destroyer. Possessing the biggest guns to be put on a destroyer at Tier X (until Elbing came along), with ballistics comparable to most light cruiser guns, she is more than capable of punching well above her weight. However, that is not her only strength. She also is one of the most if not the most agile ships in the game, although her turning is not great for a destroyer, she has a very unique ability that few other ships possess: the ability to rapidly accelerate and decelerate with her French Engine Boost, on top of the unrivaled speed. Captains who can use this ability properly will find that enemies have trouble hitting Kléber beyond close range, effectively allowing you to win a long term fight if they do not disengage, since it is foolish to follow a Kléber due to the speed advantage and her very fast, hard-hitting torpedoes with a quick reload time of just 77 seconds without modifiers.

However, the fun factor behind ""Kleber"" is, just like ""Mogador"" before her, the improved AP penetration found on her main guns. Because of the high AP penetration on them, the best out of all the Tier 10 destroyers, she is capable of citadelling enemy cruisers with ease. Ships such as ""Minotaur"", ""Smolensk"" and ""Colbert"", which would normally shred other destroyers, melt under the AP firepower of a Kléber with reload booster activated. And if ""Kleber"" gets close enough, she can citadel almost all of the cruisers in her matchmaking spread.

On first glance, Kléber may appear to be a good ship for rushing caps early on due to her speed. However, she has very poor concealment for a destroyer, only ones worse are the Russian Destroyer Leaders (""Khabarovsk"" line). The ship is not meant to cap contest, rather it is best as a second-line destroyer to provide gunboat support and be a distraction to the enemies, as well as creating ambushes behind islands. Not having smoke means you are unable to hide yourself at will, leaving you vulnerable in a cap if you are out-spotted. One way to play her is to play her like a light cruiser, attacking ships and distract them. It is best to draw fire to yourself, which will usually miss due to your agility. If there is an aircraft carrier in the battle, play closer to your team so the enemy carrier has a harder time attacking you without losing planes.

Kléber has no modules to research.

The recommended upgrades for Kléber are as follows:

** If available, captains are encouraged to consider Engine Boost Modification 1

to enhance the Engine Boost

Kléber as represented in World of Warships is a fictional warship – no member of the Mogador-class survived for a post-war refit, and likewise none of the follow-on designs called for a higher speed or improved torpedo firepower.

The historical successor to the Mogador-class was the 3,000-ton Type 1939 Contre-Torpilleur, intended to address the poor air-defense of French destroyers. Two 100mm CAD Mle 1930 twin anti-aircraft mounts would replace the 550mm Mle 1928D torpedo mounts aft, with a high angle director being fitted amidships. Close-range AA would consist only of the 13.2mm machine gun, doing away with the anemic 37mm guns. The ships would have greater endurance and superior handling to the Mogador-class. Three names were assigned to the Type 1939 Contre-Torpilleur; Marceau, Desaix, and Kléber.

However, the Naval General Staff was dissatisfied with the design, due to the poor performance of the 138.6/50 Mle 1934, and the excessive topweight incurred by the new 100mm guns - which amounted to 27 tons before ammunition and fire control equipment was included.

Due to the enforced pause in construction after France's entry into WWII (3 September 1939), time was available to revise the design. It was envisioned that the Type 1939 destroyers could have their main guns replaced by eight dual-purpose 130mm/45 in four twin mounts, with the light AA consisting of 37mm guns supported by 25mm cannons or 13.2mm machine guns. The extra 37mm guns would replace the aft torpedo tubes rather than previously planned 100mm guns.

On 15 April 1940, the order to re-start construction was given, though there was no time to act on this. Plans for procurement were scrapped by the fall of France in June 1940, without any of the ships having been laid down. Two weeks prior to the restart order, a request for six ships of a modified design (known as the Type 1940) was given, but there was no time for any designs to be drawn up, ultimately ending the development of the Contre-Torpilleur for good.

Ships of France
Destroyers
Retrieved from "http://wiki.wargaming.net/en/index.php?title=Ship:Kléber&oldid=321987"
Categories:
Your location:
To log in, select the region where your account is registered
CIS Europe North America Asia
Or use Microsoft Login to enter WoT XBOX ecosystem
Log in