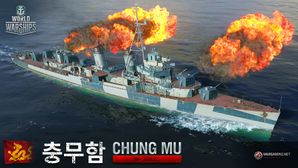 A former U.S. Navy Fletcher-class destroyer (USS Erben, DD-631) that was transferred to the Republic of Korea Navy in 1963. The ship carried good armament and had enhanced AA capabilities.

Players familiar with Tier IX American destroyer Fletcher will be at home in Chung Mu, as most of the important characteristics of both ships are extremely similar.

While Chung Mu retains the excellent close range firepower of Fletcher, she has the Pan-Asian line signature weapon — deep water torpedoes — and has access to the unique Pan-Asian Smoke Generator

. Consequently, Chung Mu is uniquely dangerous to both cruisers, battleships, and the occasional aircraft carrier. While Chung Mu is entirely capable of contesting capture points just like her American sister, her inability to damage destroyers with her torpedoes hampers her ability to control enemy destroyer access to those capture points. Rather, Chung Mu excels at cooperative flanking, where she can easily destroy distracted cruisers and battleships. Her most important upgrade from Hsienyang is gaining access to Upgrade Slot 6, allowing captains to customize their Chung Mu into builds that befit their preferred play style for the ship.

Players will be tempted to exchange the Smoke Generator

, but the radar's modest range and duration makes it difficult to employ effectively in the absence of smoke. As such, the radar consumable is best used by experienced players or those working in a division, as the consumable requires the close cooperation of allies to take advantage of the targets thus spotted.

Availability of researchable upgrades for Chung Mu is as follows:

Captains will want to prioritize Hull (B) first, as the extra range provided by the fire control module is far less important than the extra hit points and better rudder shift of the B hull. The improved torpedoes should come next; the increase to main battery range should be saved for last or skipped entirely.

The recommended upgrades for Chung Mu are as follows:

Upgrade recommendations for Slots 1, 3, 4, and 5 are fairly easy to make; captains who equip Surveillance Radar

instead of Smoke Generator

in Upgrade Slot 2. The upgrade chosen for Upgrade Slot 6 — and the corresponding commander skills — will separate one Chung Mu from another.

Torpedo Build: Captains wishing to focus their Chung Mu as a torpedo boat will opt for Torpedo Tubes Modification 2

in Upgrade Slot 6. This lowers her torpedo reload to only 103.7 seconds (down from 122 seconds). If her commander invests in the Level 3 commander skill Torpedo Armament Expertise, the reload time drops to a scant 93 seconds. Given how hard her torpedoes hit and how fast they travel, this configuration of Chung Mu can give even the vaunted Japanese destroyers a run for their money in the torpedo damage category.

. When coupled with Level 3 commander skill Basic Firing Training, her rate of fire increases significantly. In this configuration, the reload time on her main battery guns drops to 2.6 seconds (from a base of 3.3 seconds).

in the final upgrade slot. While this pushes her main battery range out to 15.0 km, landing shells on all but the slowest, largest ships at such range is incredibly difficult.

The following captain skills are useful for Chung Mu. Skills with a single star are objectively useful, but two and three star options are far superior.

Regardless of other choices, Chung Mu commanders are strongly encouraged invest in either Priority Target or Preventative Maintenance at Level 1, Last Stand at Level 2, Survivability Expert at Level 3, and Concealment Expert at Level 4. Where points go after that depends on how captains wish to play the ship.

A Torpedo Build Chung Mu will want to invest in Torpedo Armament Expertise at Level 3, whereas a Main Battery Build Chung Mu will want to pick up Basic Firing Training — and probably Demolition Expert — instead. Captains concerned about enemy aircraft could opt for Advanced Firing Training or Manual Fire Control for AA Armament. The latter is the better option, as Chung Mu will run most of the time with her anti-aircraft guns disabled in order to avoid detection (making the additional AA range less valuable).

) signal will further boost her excellent speed and allow her to move around the map more quickly as needed. November Foxtrot (

) signals to maximize the fire chance of her main battery shells.

The Chung Mu was the first destroyer of the Republic of Korea navy. It was given by the USN on May 16th, 1963 and retired in 1993. The ship served in multiple anti-spy missions around South Korea after the Korean war, as North Korean spies frequently tried to infiltrate through the sea. Over 31 years of its service, the ship destroyed 6 North Korean spy ships.

Ships of Pan-Asia
Destroyers
Retrieved from "http://wiki.wargaming.net/en/index.php?title=Ship:Chung_Mu&oldid=324593"
Categories:
Your location:
To log in, select the region where your account is registered
CIS Europe North America Asia
Or use Microsoft Login to enter WoT XBOX ecosystem
Log in