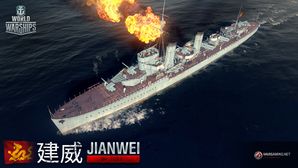 Developed in Britain, the design of this destroyer flotilla leader was offered to the Government of the Republic of China in 1929 (Project T.306), but it never materialized. The ship carried five main guns and two triple torpedo launchers.

Compared to the competition, Tier V's Jianwei doesn't have a lot to recommend it. She lacks a strong suit: Japanese and German destroyers Mutsuki, Minekaze, and T-22 have the best torpedoes and among lowest detection of Tier V destroyers; Russian destroyer Podvoisky has the fastest speed of Tier V ships (a ridiculous 42 knots unbuffed), and American destroyer Nicholas has the best survivability and main battery firepower of the tier.

What Jianwei has instead is an odd mix of Podvoisky’s slow main battery reload and decent health pool, torpedo range equivalent to a Mutsuki that has the Torpedo Acceleration skill, and main battery firing range, speed, and detection similar to Nicholas. Subsequently, it finds a niche at Tier V as a well-rounded ship; a jack-of-all-trades, master of none. This leaves captains free to decide what they want to focus on making the ship to be through mounting upgrades & selecting various commander skills that will enhance her in various ways.

Availability of researchable upgrades for Jianwei is as follows:

Most destroyer captains will benefit the most from the larger health pool offered by Hull (B); spend early experience gains there. Captains are advised to invest in whichever of the armament buffs — either the improved torpedoes or the main battery range increase — best fits their play style in the ship.

The recommended upgrades for Jianwei are as follows:

Key skills for Jianwei commanders include Priority Target, Adrenaline Rush, Last Stand, and Concealment Expert. As there are a variety of pairs of Tier III skills that are suitable for Jianwei, players are recommended to carefully decide how they want to play Jianwei before deciding on the skills. The ship has no particular strong points, hence making the decisions on choosing which Tier III skill first the most important part when setting up to play Jianwei

Jianwei can equip the following consumables:

) are recommended for players choosing main batteries as their primary weapon for dealing damage or in conjunction with their torpedoes. Juliet Whiskey Unaone (

) is not recommended due to the torpedoes already having a high chance of causing flooding. Juliet Charlie (

) is left to the player's discretion as to whether to they feel that Jianwei detonates easily. Equal Speed Charlie London (

) are recommended for faster captain (re)training.

Ships of Pan-Asia
Destroyers
Retrieved from "http://wiki.wargaming.net/en/index.php?title=Ship:Jianwei&oldid=317479"
Categories:
Your location:
To log in, select the region where your account is registered
CIS Europe North America Asia
Or use Microsoft Login to enter WoT XBOX ecosystem
Log in