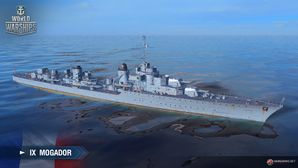 The most powerful large destroyers (French "contre-torpilleurs") among those built for the French Navy. Due to the placement of her artillery guns in twin mounts, the ship outgunned not only all of her predecessors in terms of firepower, but also most contemporary destroyers. Another special feature of the Mogador-class ships was the arrangement of their torpedo armament, where two torpedo tubes were placed along each side of the ship.

Mogador is the Tier IX destroyer of the French Tech Tree. She continues the trend set by Le Fantasque, but with a welcome increase in firepower and a more convenient gun layout. Instead of five single mounted guns, Mogador sports eight in four twin mounts mounted along the centerline, making gunnery in total more convenient.

The most prominent features of Mogador are her speed, which can go well above 50kn as well as her Main Battery Reload Booster

, which gives her the edge in a duel vs another destroyer or allows her to rack up a lot of damage against a target showing broadside. At the same time her lackluster concealment means that opposing destroyers will have the option to react before Mogador can engage them. On top of that, the lack of a Smoke Generator

means that Mogador will struggle to disengage if required. Mogador’s torpedo armament is also lacking, making them more of a side weapon or a tool when rushing an opponent rather than a consistent factor.

This means that Mogador is best played in combination with an allied destroyer, to overcome her concealment issues and the lack of a smoke generator while the high burst damage potential allows the duo to dispose of any destroyers they might face.

Availability of researchable upgrades for Mogador is as follows:

The recommended upgrades for Mogador are as follows:

Key skills for Mogador commanders include the skills that improve her main armament and survivability.

Mogador can equip the following consumables:

Mogador was the lead ship of the French Navy's Mogador class of destroyers (French: contre-torpilleur). Named for the Moroccan town, she was built before the outbreak of World War II. The ship was heavily damaged during the British attack on Mers-el-Kébir on 3 July 1940, but was later repaired and sailed to Toulon. She was scuttled in Toulon Harbor when the Germans tried to seize her, along with the rest of the fleet, on 27 November 1942.
The Mogador and her sister Volta were the last contre-torpilleurs built by the French Navy, a not entirely successful attempt to build a ship capable of out-fighting every other ship below her tonnage. "In technological terms Mogador and Volta were ships with the armament of a light cruiser in the hull of destroyer; the contre-torpilleur as a type had been pushed past the limits of its capabilities."

The Mogador-class were the ultimate evolution of the contre-torpilleur, and had more firepower than anyone had ever tried to put on a destroyer hull. The design, initially known as the ‘Type 1931 contre-torpilleur’, was intended to operate with the new battleships of the Dunkerque-class, and were thus intended to operate in the Atlantic against German raiders. Maximum firepower was stressed, which saw the French attempt to give the design eight main battery guns. In order to achieve this, displacement was radically increased over the Le Fantasque-class – standard displacement was 2,880 tons, and at full load reached 4,026 tons.

High speed was to be maintained (design speed was 39 knots), and for this end newer Indret boilers running hotter and at higher pressures were used – 35 kg/cm2 and 385°C. These fed a pair of turbine groups that produced 92,000 shp, and top speed in service proved to be the same as the Le Fantasque-class (39 to 40 knots).

In order to gain the maximum firepower, eight 138.6/50 were supplied, mounted in four twin Mle 1934 pseudo-turrets. Ballistic performance remained the same as in the Mle 1929, as did the fire control arrangements, but a modified breech was used in order to improve the rate of fire – and backfired entirely. Due to a serious design error that caused the shells to not line up properly with the breech, on top of quality control issues, caused the rate of fire to plummet to 3-4 rpm, interspaced with frequent jams. Attempts to fix this led to the improved Mle 1934R1938, but the system still worked poorly and rate of fire was only 5-6 rpm. Overall firepower was increased compared to Le Fantasque due to the greater number of guns, but only barely. Fire control was identical to Le Fantasque – a gun director above the bridge with a 5-meter stereoscopic rangefinder feeding an Mle 1929M36 fire control computer, with an FTP transmitting system.

The torpedo battery also differed, with total tubes increasing (to ten) with two Mle 1928T and two Mle 1928D, so the broadside was reduced from six to five torpedoes. Fire control arrangements were identical to the Le Fantasque-class, a director above the gun director with a 5-meter rangefinder feeding an Mle 1933 torpedo fire control computer. Like the prior classes, anti-aircraft battery remained unchanged and poor.

Overall, the class was an exacerbation of most of the attributes of the Le Fantasque-class – despite the increased displacement they were just as impressively fast, and were stable platforms. In an improvement over the prior class, their hulls were much more robust and did not take damage in the Atlantic weather. Unfortunately, their handling remained just as bad – worse, even, as they had a wider turning radius than the battleships they were meant to escort. Firepower on paper was fantastic, but the serious flaws of the replenishment system and breech system greatly reduced this, especially in the event of sustained combat. For better or for worse the class did not see intensive service in the Second World War, so questions of overall machinery reliability remain unanswered.

Ships of France
Destroyers
Retrieved from "http://wiki.wargaming.net/en/index.php?title=Ship:Mogador&oldid=318531"
Categories:
Your location:
To log in, select the region where your account is registered
CIS Europe North America Asia
Or use Microsoft Login to enter WoT XBOX ecosystem
Log in