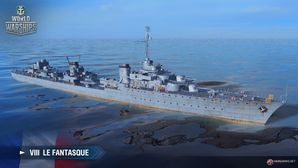 Large and extremely fast ships. They carried a main battery that consisted of new 139 mm guns with improved shell ballistics and an extended firing range.

Le Fantasque is a step up from the preceding Tier VII destroyer, Vauquelin, featuring higher than average hit points for a Tier VIII destroyer, higher base speed, and the standard Tier VIII access to upgrade Slot 5.

The Slot 5 upgrade allows players to better test out the capabilities of Le Fantasque in ambushing, hunting, or whittling down large targets from afar. They can select between Steering Gears Modification 2

for ambushing and or hunting enemy destroyers. However, the latter strategy can be countered if the enemy destroyer has Radio Location, putting oneself at a disadvantage in the engagement. Ambushing and hunting destroyers is best when the captain and ship are outfitted with skills and signals that improve the concealment, ship speed, main battery reload, and survivability of the ship.

Le Fantasque’s AP shells are very potent against thick or armored destroyers and light cruisers, with a high potential to citadel most cruisers at under 7km. They are also useful against battleships at range, should the player lack the Inertia Fuse for HE Shells skill. Coupled with the fact that Le Fantasque has access to Main Battery Reload Booster

, she is a fearsome threat for most cruisers within her torpedo range. However, due to her large profile, this makes being close to cruisers dangerous for Le Fantasque as well.

Overall, Le Fantasque is a very agile destroyer capable of shredding lightly armored targets and whittling down larger armored targets. Her speed is not to be underestimated, as it may lead to one's demise should they be caught in the open against Le Fantasque.

Availability of researchable upgrades for Le Fantasque is as follows:

The recommended upgrades for Le Fantasque are as follows:

Slot 5 may be replaced with Steering Gears Modification 2

Le Fantasque ("The capricious one") was a large destroyer ("contre-torpilleur", "torpedo boat destroyer") of the French Navy which served during the Second World War. Her class is the fastest type of destroyer ever built.

Initially, what would have been the Type 1929 Contre-Torpilleurs would have closely resembled the very successful Vauquelin-class. However, the large number of contre-torpilleurs procured by France – twenty-four laid down up to this point – was not ignored abroad, especially by the Marine Nationale’s rival, the Italian Regia Marina (which the contre-torpilleur was specifically intended to operate against). In order to match this threat, the Italians had begun procuring a new type of ‘large scout’ (grandi esploratori), known as the Giussano-class. Resembling the small cruisers the esploratori had begun as rather than the large destroyer-like vessels they had become in WWI (esploratori leggeri), these ships were designed with the express purpose of hunting down and destroying the French contre-torpilleurs – and they appeared very well equipped to do so. The 5,000-ton ships were fast, with a top speed of 37 knots, and boasted a powerful armament of eight 152mm guns in four twin turrets with director control. These ships represented a major threat to French planning, as these small cruisers would be capable of running down any French ship, and easily had the firepower to put down any of the contre-torpilleurs. While the French admiralty believed that their three-ship divisions could deal with one of these small cruisers (which seems to ignore the fact that Italian cruisers always operated in pairs!), they believed it necessary to make their new Type 1929 destroyers significantly more powerful in response, increasing their chances of victory in the event they did clash with one of these small cruisers. This caused a major displacement increase over prior French ships of the type – standard displacement was now 2,570 tons standard, 3,417 tons fully loaded.

The first element the French addressed was speed – these ships would need to be just as fast as the Italian ships, so a top speed of 37 knots was pegged, and in order to meet this newer and more powerful superheated machinery was adopted (all previous French destroyers using saturated steam systems). The four boilers (27 kg/cm2, 325°C) fed two turbine groups which produced a combined 74,000 shp, which in service proved adequate for a top speed of 39 to 40 knots, well exceeding the design figure. The major downside was the unreliability of this machinery, with the turbines adopting the unfortunate tendency to strip themselves after significant use, which would hamper the ships their entire service lives.

The firepower of the main battery was also improved, with the new 138.6mm/50 Mle 1929. The gun was largely the same as the Mle 1927 that came before it, but had a barrel 10 caliber-lengths longer (25% increase) and used a larger propellant charge (BM11, 12.09 kg versus the 8.97 kg BM7), which increased the muzzle velocity of the guns from 700 to 800 meters per second. Maximum elevation of the mounts was increased by two degrees to +30°, which was sufficient for a maximum ballistic range of 20,000 meters. The more reasonable velocity also fixed the dispersion issue that had hampered the performance of the earlier 40-caliber length guns, the /50’s instead producing well-grouped salvos. No.3 gun was moved further aft to improve firing arcs. Although attempts were made to improve ammunition handling, this actually proved to be a regression – the new hoists had an identical delivery rate of 20 rounds per minute, but the new design proved extremely jam-prone, and also had the worrying habit of occasionally dropping shells back down the ammunition hoists. On the whole, the practical rate of fire was reduced to closer to 7 rpm. As if that was not bad enough, the increased recoil force of the guns over their predecessors (57 tons versus 43.5 tons) proved to be too much for the platforms they were placed on, which were defectively produced by private yards and thus could not handle the force of the guns firing, forcing their replacement. On the other hand, fire control proved to be a major improvement over earlier ships, as the ships finally fitted a director, with a 5-meter base length stereoscopic rangefinder. The fire control computer was the same Mle 1929 that equipped the Vauquelin-class, with the same FTP system. Initially, it was attempted to fit an RPC system, but it was far too fragile, and underpowered, to be workable and had to be removed. In 1936 the fire control computer was upgraded with a graph for plotting range, and was re-designated the Mle 1929M36.

Torpedo firepower was also improved, with the Mle 1928D banks being replaced by Mle 1928T’s, thus increasing torpedo tube count from seven to nine (and torpedo broadside from five to six). Torpedo fire control was conducted from a director above the gun director with a modified Mle 1933 computer.

Overall, the performance of the new ships was mixed. They were fairly stable platforms, and had an excellent top speed, surpassing design speed for a top speed of 39 to 40 knots. Their main guns were considerably more powerful than before, had better positioning, and in combination with better fire control raised practical engagement ranges to 14-15 km, competitive with any destroyer (though still short of what cruisers were capable of). Their torpedo firepower was better than any prior contre-torpilleur.

However, they also had significant drawbacks. The hulls were lightly built, and with low-quality steel, resulting in damaging being taken in storms, and serious hull pitting after less than half a decade in service. Machinery, though powerful, was relatively fragile and did not take well to sustained service – in 1943, when re-designated from destroyers to light cruisers, this was not as recognition of their ‘power’ or size as fighting units, but rather the desperate need to get them to a position of higher property for maintenance and repair than other Allied and Co-belligerent destroyers. Although fire control improvements were made, the RPC system could never be made to work, and ammunition replenishment systems remained inadequate, reducing their effective firepower (especially in sustained combat). Anti-aircraft firepower remained poor, the same as older French destroyers (though rather than the 37mm guns being in separate mounts, these were positioned in twin mounts). Maneuvering capability and ASW capabilities also remained sub-par.

The high points of the design would serve members of the Le Fantasque-class very well in the Second World War, but their defects and shortcomings would also greatly hamper them, and in some cases prove to be their undoing.

Ships of France
Destroyers
Retrieved from "http://wiki.wargaming.net/en/index.php?title=Ship:Le_Fantasque&oldid=318530"
Categories:
Your location:
To log in, select the region where your account is registered
CIS Europe North America Asia
Or use Microsoft Login to enter WoT XBOX ecosystem
Log in